A Musical comedy featuring 19 new songs . Goes behind the microphone and under the judges’ desk to reveal the (not necessarily accurate) story of heartache and laughter. Meet Chenice who lives in an ITV blackspot because her Grandad’s iron lung interferes with the signal in her caravan, and the only girl in the world who has never heard of The X Factor. When she accidentally stumbles into the audition queue with her talking dog, she starts a journey to both stardom and love. Along the way she’s joined by contestants with vastly varying degrees of ability, some judges you might well recognise and Max, a handsome ukulele playing plumber and part time eco-warrior.

In December 2012, it was announced by Harry Hill that he was working on a musical based on the talent show The X Factor. Following two workshops in March 2013, the show was officially confirmed and it was announced that the musical would open in London in 2014, and would be called It’s Time To Face The Musical!
On 22 May, it was announced the show would now be called I Can't Sing!, and that it would play the London Palladium, with tickets going on sale the following day. The show which has cost £6 million to produce (so far) is written by Harry Hill and is directed by Sean Foley, with choreography by Kate Prince, set design by Es Devlin, costume design by Leah Archer, orchestrations by Chris Egan, lighting design by Jon Clark and sound design by Gareth Owen. An original score of 19 songs has been penned, by Hill with music by Steve Brown.
At the press launch for the show on 2 September 2013, Simon Cowell said of the concept of an X Factor Musical: “I thought the idea of an X Factor musical, if it was too pompous, would be rubbish, and I did not want it to appear like a cash cow. I wanted it to be a celebration of the show but at the same time poke fun at what we do, because you can’t take it too seriously. Harry of all the people was the right person. His observation of the show in the past has been spot on.”
West End (2014)
I Can't Sing! is expected to begin previews on 27 February 2014, at the London Palladium, London, before holding its official opening gala night on 26 March. On 30 August 2013, it was announced that Nigel Harman will play the role of Simon Cowell, Alan Morrissey will play the role of Max with Cynthia Erivo playing Chenice the main contestant in the story. 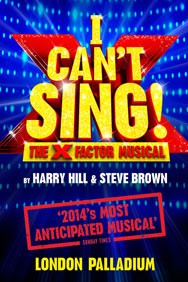 "I'm not saying “I Can't Kvetch!” because there are all kinds of niggles and caveats – not least that the whole venture feels more than a tad belated. But there is a bonkers, surreal charm to the loopy lampooning..." Paul Taylor for The Independent

"Although it has flashes of wit, Harry Hill and Steve Brown's show doesn't know whether it wants to excoriate The X Factor or boost its TV ratings." Michael Billington for The Guardian