In 1936, as Fascism swept across Europe, Spain, caught up in a Civil War, cried out for help. People travelled from all over the world, joining the International Brigades, risking their lives for the freedom of others. Amongst them was Sammy, a young Jewish boy, who against the wishes of his mother Rebecca, left London’s East End after nobly fighting the fascists in Cable Street in order to fight for the Spanish Republican cause. The story tells of Sammy’s experiences in the battlefield with his comrades-in-arms, George, the likeable cockney boxer, and Jack, the cynical Great War veteran.
Sammy meets and falls in love with Pilar, a young girl from Catalonia, whose life was torn apart by the war. Rebecca decides to travel to Spain, and during her search for her son, she unexpectedly falls in love with Errnesto, a wounded anarchist she is nursing back to health. Woven into the story is the character of the legendary Dolores Ibarruri, “La Pasionaria”, whose song “No Pasaran” was the inspiration for the fight against fascism.

The production, based on the book by Judith Johnson, was staged to mark the 75 th anniversary of the Spanish Civil War. Despite its noble intentions, some stirring anthems, and clever inflections of flamenco and guitar in the music, it failed as a cohesive piece of theatre, the “book creaks under the strain of under-developed characters and flat-footed dialogue” (Times). It was felt to be an interesting work in progress.

Following the success of their 2004 Musical ‘Release The Beat’ at the Arcola Theatre, Judith Johnson and KS Lewkowicz were inspired to write ‘Goodbye Barcelona’ by a feature in the Guardian newspaper from 2000, profiling some of the surviving International Brigades members at that time.

These were the people who had volunteered to fight the fascists in the Spanish Civil War, and who had some amazing stories to tell the writers. Further inspired by the indomitable spirit of the Brigaders, then in their nineties, the writers began working on the show, commissioned by the Arcola Theatre and the Arts Council. There were 3 readings leading up to the 2011 production, two at the Arcola Theatre as part of their Grimeborn season in 2008 & 2009, and a third at the Royal Academy of Music in 2010. The initial production ran from November to December 2011 at the Arcola Theatre; in time to commemorate the 75th anniversary of the Spanish Civil War, and the formation of the International Brigades. 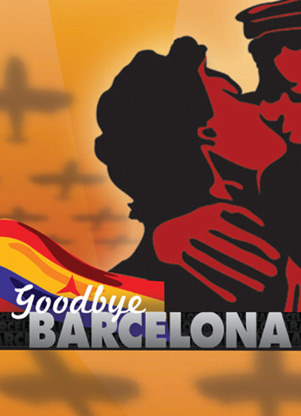