«Gettin' The Band Back Together»

The new musical that proves it's never too late to give your dreams one last shot.

Mitch Papadopolous always dreamed about being the next Bon Jovi, but he chose security over stardom and left those daydreams behind for a day job. For a while he thought he had everything—the high paying job, the high-rise apartment—until his 40th birthday when he got handed a pink slip and had to move back in with his Mom in Sayreville, New Jersey. And when his high school arch nemesis (with a 20-year-old grudge and a tangerine spray tan) threatens to foreclose on their house, this big-shot banker must save his small-town home the only way he can… by winning The Battle of the Bands. So he dusts off his guitar, gathers his old gang (the math teacher who isn’t good at math, the Irish cop who dreams about being on Broadway, the dermatologist who can’t get a date, and a 16-year-old Jewish rapper who makes Vanilla Ice look cool), and sets out to win the battle, and maybe even win back the high school sweetheart he left behind, proving it’s never too late to give your dreams one last shot.

George Street Playhouse, 2013
Originally titled "Garage Band," Gettin' the Band Back Together was developed through a four-year improvisational rehearsal process by Ken Davenport and the Grundleshotz. It premiered at the George Street Playhouse on September 24, 2013, starring Alison Fraser and Mitchell Jarvis. The production was directed by John Rando and choreographed by Kelly Devine. Residents of Sayreville, New Jersey, the musical's setting and Jon Bon Jovi's hometown, were offered half-price tickets to the production's final preview performance on October 3, and first responders and emergency workers from Sayreville were offered complimentary tickets.

Pre-Broadway Workshop, 2014
On June 24, 2014, Gettin' the Band Back Together had a workshop performance in New York City starring Constantine Maroulis and Marilu Henner and directed by John Rando.

Broadway 2018
The musical opened on Broadway at the Belasco Theatre on July 19, 2018 in previews with opening night on August 13. The production is directed by Rando with choreography by Chris Bailey, scenic design by Derek McLane, costume design by Emily Rebholz and lighting design by Ken Billington.

Aucun dossier informatif complémentaire concernant Gettin' The Band Back Together 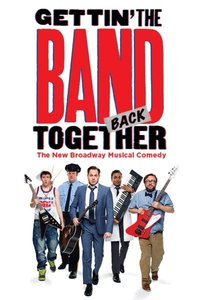 Gettin' The Band Back Together (2018-08-Belasco Theatre-Broadway)