Billy Gilbert, who played Mario, was a popular comic star of films and the stage who had recently appeared on Broadway in two floperettas, Gypsy Lady and a revival of The Chocolate Soldier. Gilbert cowrote the book, and one Gen Genovese was colibrettist, lyricist, producer, and author of the story on which the show was based.
Buttrio Square had a terribly troubled history. During rehearsals, a postdated check written to cover the Equity bond bounced, and Equity stepped in and halted rehearsals. Both Boston and Philadelphia tryouts were scratched when a major backer withdrew funding. Eugene Loring, the choreographer, took over the direction as well, replacing Dale Wasserman. At the last minute, Loring was forced to form a syndicate of fifty enthusiastic cast members, each of whom invested two hundred dollars so that the show could open. But critics were horrified, with good words only for talented newcomer Susan Johnson as the would-be WAC.

Presse: "The Theater: New Musical in Manhattan" Oct. 27, 1952 - The Time
Buttrio Square (music by Arthur Jones & Fred Stamer; book by Billy Gilbert & Gen Genovese; lyrics by Mr. Genovese) is the sort of 1880-style musical that would have looked old hat in 1912. In 1952 it is overpoweringly tedious and trite—all about G.I.s in an occupied Italian village where fraternizing is forbidden. An American captain is secretly married to a native girl, the girl is going to have a baby, a sentimental old Italian wants his wife to have one, and the village needs one more inhabitant to graduate into a town. Though Buttrio Square is the center-of-life in an Italian community, it looks like the market place of a dozen Ruritanian capitals. Up goes the curtain, and out pop youths and maidens committing the usual merry-month-of-Mayhem. Thereafter, there is much strenuous dancing, deplorable banter, and songs with such titles as Let's Make It Forever and You're Mine, All Mine.
The one pleasant note is a vivacious blonde named Susan Johnson. She brightens the landscape and has one pretty good song called Get Me Out, in which every member of the audience feels like joining. 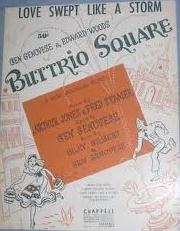