Bullets Over Broadway the Musical is a musical written by Woody Allen, based on his and Douglas McGrath's film Bullets over Broadway about a young playwright whose first Broadway play is financed by a gangster. The score consists of jazz and popular standards of the years between World War I and about 1930 by various songwriters.

In 1929, playwright David Shayne is finally getting his first play God of Our Fathers produced on Broadway. The producer, Julian Marx, has enlisted the wealthy gangster Nick Valenti to pay for the show. Valenti wants to have his dim-witted and untalented girlfriend, Olive Neal, star as one of the leads. Valenti has assigned his strong-armed gangster, Cheech, to watch over Olive. Surprisingly, Cheech comes up with great ideas for improving the play. However, aging diva Helen Sinclair, the real star of the show, romances the younger David, who already has a girlfriend, Ellen. Meanwhile, the leading man, Warner Purcell, has his eye on Olive.

The musical is based on the 1994 film Bullets over Broadway, which had a screenplay by Woody Allen and Douglas McGrath. Work on a musical version of Bullets started in 2000, with Marvin Hamlisch and Craig Carnelia writing the music and Allen writing the book. In 2003, Hamlisch confirmed that work on the musical was proceeding.

In an interview on the opening night of the musical in April 2014, Allen said that he had resisted turning the film into a musical for years, having no interest in it as a musical. However, his sister Letty Aronson thought that it could be done as a period musical, and Allen then became interested. Marvin Hamlisch had played a few of the new songs for Allen, but Allen did not think they were right for the musical. His sister then proposed the idea of using songs of the 1920s, "and it suddenly came to life." Susan Stroman was brought into the creative team two years before the opening.

Bullets Over Broadway the Musical premiered on Broadway at the St. James Theatre on March 11, 2014 in previews, officially opening on April 10, 2014. Directed and choreographed by Susan Stroman, the cast features Marin Mazzie (as Helen Sinclair), Zach Braff (as David Shayne), Nick Cordero (as Cheech), Karen Ziemba (as Eden Brent), Vincent Pastore (as Nick Valenti), and Brooks Ashmanskas (as Warner Purcell). Scenic design is by Santo Loquasto, costumes by William Ivey Long, lighting by Donald Holder, sound by Peter Hylenski, musical arrangements and supervision by Glen Kelly and orchestrations by Doug Besterman.
The musical contains jazz and popular standards from the years between World War I and about 1930, with additional lyrics written by Glen Kelly.
The musical closed on August 24, 2014, after 156 performances and 33 previews.

A touring production will start in October 2015. It will begin with a two-week stop at Playhouse Square in Cleveland, Ohio from October 6–18. This is a non-Equity tour, directed by Jeff Whiting.

Acte 1
"Tiger Rag" – The Atta-Girls, Olive, Nick, Cheech and Gangsters
"Gee, Baby, Ain't I Good to You" – Nick and Olive
"Blues My Naughty Sweetie Gives to Me" – Ellen and David
"Tain't a Fit Night Out for Man or Beast" – Valenti Gang, Kustabeck Gang and Flappers
"The Hot Dog Song" – Olive
"Gee Baby, Ain't I Good to You (Reprise)" – Nick
"They Go Wild, Simply Wild, Over Me" – Helen and Julian
"Up a Lazy River" – Cheech
"I'm Sitting on Top of the World" – David
"Let's Misbehave" – Warner and Olive
"There's a Broken Heart for Every Light on Broadway" – Helen and David
"(I'll Be Glad When You're Dead) You Rascal You" – The Atta-Girls
"Tain't Nobody's Biz-ness If I Do" – Cheech and Gangsters
"Runnin' Wild" – Full Company 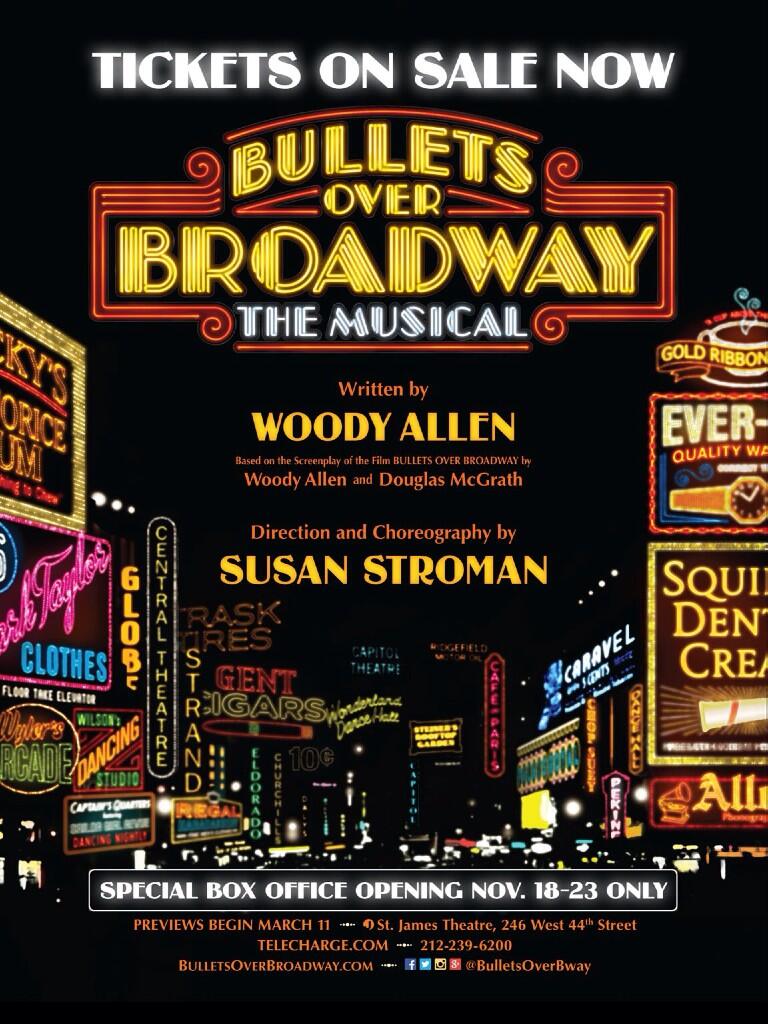 "Showgirls dressed like frisky tigers shake their moneymakers near the beginning of Woody Allen’s “Bullets Over Broadway” — and they’re a symbol, for this musical certainly works its tail off to tickle and delight." Joe Dziemianowicz for New York Daily News

"Woody Allen’s adaptation of his 1994 movie checks all the boxes: zingers and puns, slapstick and visual gags, leggy showgirls and tap-dancing chorus boys, hammy stars and lavish set pieces. This is defiantly old-fashioned entertainment, and boy does it hit the spot!" Elisabeth Vincentelli for New York Post

"It's an extremely funny, devilishly entertaining show from start to finish." Robert Feldberg for The Record

"The show is a watered-down champagne cocktail that too seldom gets beyond its recycled jokes and second-hand characterizations to assert an exciting new identity." David Rooney for The Hollywood Reporter

"The book (from Woody Allen’s own screenplay for his 1994 film) is feeble on laughs, and certain key performers don’t seem comfortable navigating the earthy comic idiom of burlesque. So, let’s call it close — but no cigar." Marilyn Stasio for Variety