«A Trip to Chinatown»

In addition to the Gaunt and Hoyt score, many songs were interpolated into the score at one time or another during the run, as was fashionable for musicals of the era. The story concerns a widow who accidentally maneuvers several young suburban couples into a big city restaurant and brings romance to them and herself.

A group of young people in San Francisco tell their wealthy guardian, Uncle Ben, that they are going sightseeing in Chinatown. They really plan a night out on the town. They have engaged a chaperone, Mrs. Guyer, but her letter of acceptance is received by Uncle Ben, who misinterprets it as an invitation to a rendezvous. At "The Riche", the restaurant mentioned in the letter, where the young people have booked a table, he gets drunk. He does not see the young couples or Mrs. Guyer, and it turns out that he has forgotten his wallet, which leads to humorous complications. Ben is unable to scold the young people for deceiving him, as they point out that they know about his own night out.

After almost a year of touring, the musical opened at Broadway’s Madison Square Theater on November 9, 1891, and ran for 657 performances, or just short of two years. This was the longest-running Broadway musical in history up to that time (although London had seen a few longer runs), and it held that record until Irene in 1919. The show was such a hit that several road companies played it throughout the country simultaneously with the Broadway production, and at one point a second company was even opened in New York while the original company was still performing on Broadway. The cast included Trixie Friganza and Harry Conor, who introduced "The Bowery".

A version of the show was produced in 1912 under the title A Winsome Widow, and a film adaptation featuring Anna May Wong was made in 1926.

The Bowery
Reuben and Cynthia
The Widow
Push Dem Clouds Away (an African cantata)
The Chaperone
Out for a Racket
After the Ball
The Sunshine of Paradise Alley
Love Me Little, Love Me Long
Do, Do, My Huckleberry, Do
Keep A-Knockin’
Riding on the Golden Bike
Her Eyes Don’t Shine like Diamonds
Only One Girl in the World for Me
Then Say Good Bye!
She’s My Best Girl
Back among the Old Folks Once Again
McGee’s Back Yard

In 1912, a revised version of the musical was produced by Florenz Ziegfeld, Jr., with a score by Raymond Hubbell, called A Winsome Widow.
A silent film adaptation of the musical was released in 1926, called A Trip to Chinatown, starring Margaret Livingston and featuring Anna May Wong and Charles Farrell. The screenplay was by Beatrice Van, based on Hoyt's book, and the film was directed by Robert P. Kerr. 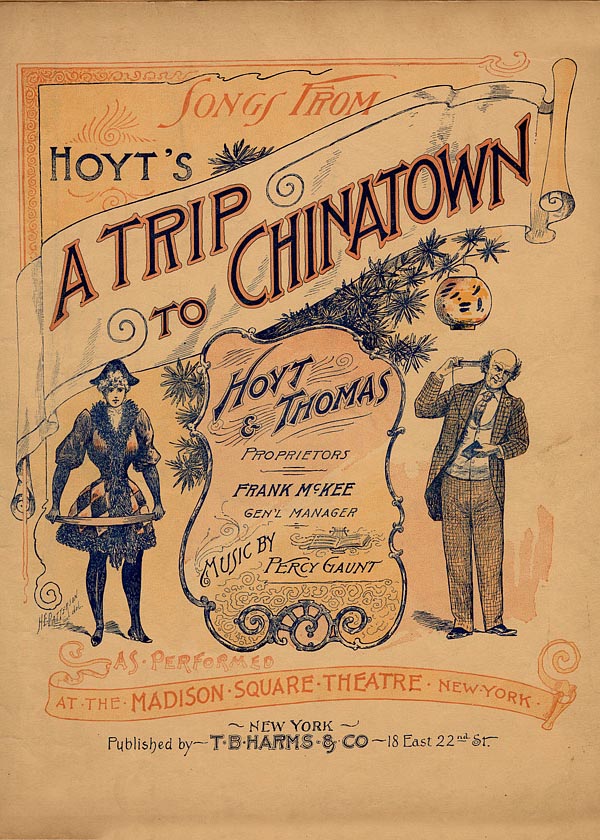 Type de série: Original
Théâtre: Brougham's Theatre (Broadway - Etats-Unis) Durée : Nombre : 657 représentationsPremière Preview : InconnuPremière : jeudi 01 janvier 1970Dernière : jeudi 01 janvier 1970Mise en scène : Chorégraphie : Producteur : Commentaires : After almost a year of touring, the musical opened at Broadway’s Madison Square Theater on November 9, 1891, and ran for 657 performances, or just short of two years. This was the longest-running Broadway musical in history up to that time (although London had seen a few longer runs), and it held that record until Irene in 1919.