«A Damsel in Distress»

A Damsel in Distress is a 1937 English-themed Hollywood musical comedy film starring Fred Astaire, Joan Fontaine, George Burns, and Gracie Allen. Loosely based upon the P.G. Wodehouse 1919 novel of the same name, and the 1928 stage play written by Wodehouse and Ian Hay, it has music and lyrics by George and Ira Gershwin, and was directed by George Stevens, the second (and last) Astaire musical directed by Stevens; the first was Swing Time.

Everyone on staff at Tottney Castle knows that the lovely Lady Alyce Marshmorton (Joan Fontaine) must marry soon, so a wager is proposed as to the identity of the lucky man. With all the likely candidates already claimed, young footman Albert (Harry Watson) places a bet on a "Mr. X," someone totally out of the blue.

Lady Alyce secretly has a romantic interest in an American no one from her family has yet met. She leaves the castle one day to venture into London, where by chance she encounters Jerry Halliday (Fred Astaire). He is an American entertainer, accompanied by press agent George (George Burns) and secretary Gracie (Gracie Allen), but he is not well enough known to be recognized by Lady Alyce.

Jerry is incorrectly led to believe that he is the American that Lady Alyce is in love with. He goes to the castle, encouraged by Albert but discouraged by Keggs (Reginald Gardiner), a scheming butler whose money is on another beau. The closest Jerry can get to Lady Alyce is a castle tour, at least until Albert can sneak him upstairs.

False impressions abound, as Jerry also fails to recognize Lady Alyce's father (Montagu Love), the lord of the manor. He is slapped in the face in a Tunnel of Love, misunderstanding the young lady's intentions entirely. In the end, however, he and Lady Alyce do find romance.

The song "Things Are Looking Up" by George and Ira Gershwin appears in the film.


The choreography explores dancing around, past, and through obstacles, and in confined spaces.

"I Can't Be Bothered Now": sung by Astaire while executing a tap solo with cane in the middle of a London street and escaping on a bus.
"Put Me to the Test": Astaire, Burns, and Allen comic tap dance with whisk brooms, a routine inspired by vaudeville duo Evans and Evans and introduced to Astaire by Burns, who quipped: "Gracie and I ended up teaching Astaire how to dance".[6]
"Stiff Upper Lip": sung by Gracie Allen, followed by the "Fun House" dance sequence by Astaire, Burns, and Allen through an amusement park funhouse, complete with hall of mirrors.
"Things Are Looking Up": Astaire sings one of Gershwin's "most beautiful, yet underappreciated ballads",[2] followed by a romantic dance through the woods with Fontaine, where George Stevens uses trees to hide Fontaine's terpsichorean shortcomings.
"A Foggy Day (in London Town)": Astaire introduces what has become a standard in the Great American Songbook, sung while alternately walking and dancing solo through a wooded landscape. It was later featured heavily in the film The Notorious Landlady, which featured Astaire in a supporting role.
"Nice Work If You Can Get It": the film's second Gershwin standard is introduced by Astaire and chorus, followed by an Astaire tap solo, executed while confined by and playing a set of drums. It was shot in one continuous take.
The movie also features two faux madrigals written by the Gershwins: "Sing of Spring" and "The Jolly Tar and the Milkmaid". These are performed by a group of madrigal singers, with Astaire joining in on the latter song. 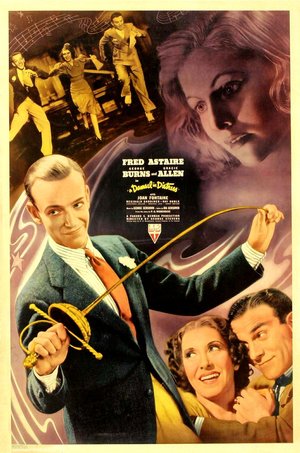