The show is presented as a series of vaudeville sketches, complete with signs at the beginning and the end (but abandoned for most of the show) announcing the next scene propped on an easel at the side of the stage. Queenie and Burrs, whose relationship is disintegrating, host a party fueled by bathtub gin, cocaine, and uninhibited sexual behavior. It quickly evolves into an orgy that culminates in tragedy. The guests include fading star Dolores; Kate, Queenie's best friend and rival; Black, Kate's younger lover, who has his eye on Queenie; Jackie, a rich, "ambisextrous" kid who has his eye on everyone, regardless of gender or age; Oscar and Phil D'Armano, a gay couple/brother act; lesbian stripper Miss Madelaine True and her morphine-addicted girlfriend Sally; colored prizefighter Eddie, his white wife Mae and Mae's underaged Lolita-like sister, Nadine.

Presented in five acts or scenes, it takes the form of a number of vaudeville sketches which casually disintegrate as the evening wears on. Queenie and her partner Burrs plan to throw a "wild party", and invite a colourful cast of characters that epitomise the world of 1920s New York, including a fading star, an "ambisextrous" socialite, a gay brother act, a lesbian stripper, a boxer and an underage innocent girl. Queenie's best friend and rival Kate brings her new lover who attracts Queenie's attention, as as the party descends into gin, sin and booze, truths are exposed and questions are asked of all the guests.

Création
The Wild Party opened at the Virginia Theatre on April 13, 2000 after 36 previews, and closed on June 11 after 68 performances. It was directed by Wolfe and choreographed by Joey McKneely. The cast included Toni Collette (making her Broadway debut) as Queenie, Mandy Patinkin as Burrs, and Yancey Arias as Black. Although her role was reduced over the course of workshop productions, Eartha Kitt, returning to Broadway after an absence of more than twenty years, created the role of Dolores. The four were backed by a large ensemble cast, each of whom has a featured song or key moments to take center stage.
In 2001, LaChiusa said that the role of Queenie was written for the African-American actress Vanessa L. Williams, who was replaced with Colette when she became pregnant. LaChiusa said: "I don't think of it as something that was lost in the piece, but it would have been fascinating to see how an audience responded to a black Queenie. The show is all about the masks that we wear culturally and the removal of those masks over the course of the party. So it's all there...".
A cast album was released on the Decca Records label.

After Midnight Dies
After Midnight Dies - Sally
Golden Boy - Eddie, Brothers D’Armano
The Movin’ Uptown Blues - Gold, Goldberg
The Lights of Broadway (Reprise) - Nadine
More - Jackie
Love Ain’t Nothin’/Welcome to Her Party - Kate, Burrs
What I Need - Queenie
How Many Women in the World? - Burrs
When It Ends - Dolores

Comparison with the off-Broadway Wild Party
The Michael John LaChiusa and Andrew Lippa versions of The Wild Party are markedly different in their storylines. In Lippa's version, the plot is tightly focused on the central love triangle of Joseph Moncure March's poem, while the LaChiusa play, while also focusing on the love triangle, has fifteen characters, nearly all of whom are given story arcs of their own within the narrative. Within those individual stories, broader themes such as racism, sexism, bisexuality, anti-semitism, and the concept of the American Dream are included.

There are major differences in the music and tone of the two shows, as well. While Lippa takes a more abstract, non-date specific approach to his compositions and orchestrations, the LaChiusa score is both more traditional in terms of musical theatre conventions as well as more period with regard to the Roaring Twenties setting. 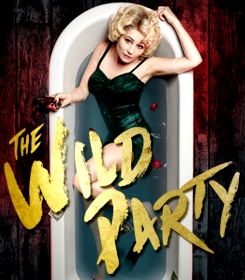