The girls of St. Godley's School are in trouble! Money for the school has run out and the place will have to close. Leave it to these resourceful girls, and their unflappable headmistress (played by a man in drag), to come up with a plan to keep the school afloat. Using whatever they can find at hand, the girls mount an original production: a musical version of Moby Dick, featuring their headmistress in the coveted role of Captain Ahab.

Having become involved with the restoration of Oxford’s Old Fire Station Theatre, producer Cameron Mackintosh sought a new musical to inaugurate its re-opening. Impressed by an audio tape sent him by Lonqden. Mackintosh offered to stage what was then called MOBY DICK: A WHALE OF A TALE!
Originally an intimate piece with a cast of twelve performing with an upright piano, it became a greatly expanded version featuring a troupe of thirty and a six-piece band. The end result was a madcap romp, with veteran cabaret star Tony Monopoly playing the headmistress/Captain Ahab in drag, that immediately developed a cult following among the university students. One of its first venues was aboard Ki Longfellow's Old Profanity Showboat where after a slow start, it quickly became sold out. Against the advice of his staff, Mackintosh decided the show was suited for a full-fledged West End production, and in March 1992 he opened MOBY DICK! THE MUSICAL at the Piccadilly Theatre.
Despite scathing reviews, audiences were increasingly appreciative and nightly gave ovations. The economics of the large venue forced it to close after 4 months. Such was its public appeal, Cameron later recalled, that the announcement of closure sent audience reaction into orbit and it barnstormed out of the West End as if MOBY DICK! THE MUSICAL were one of the greatest hits of all time.
Music Theatre International's own Russell Ochocki "Americanized" the show in a 2003 New York workshop. By removing all the unfamiliar British references and playing down many of the burlesque aspects, the reworked show is now the licensed version. Filled with double and triple entendre, and more goofy humor than you can imagine, MOBY DICK! THE MUSICAL is guaranteed to make your audiences laugh in spite of themselves. 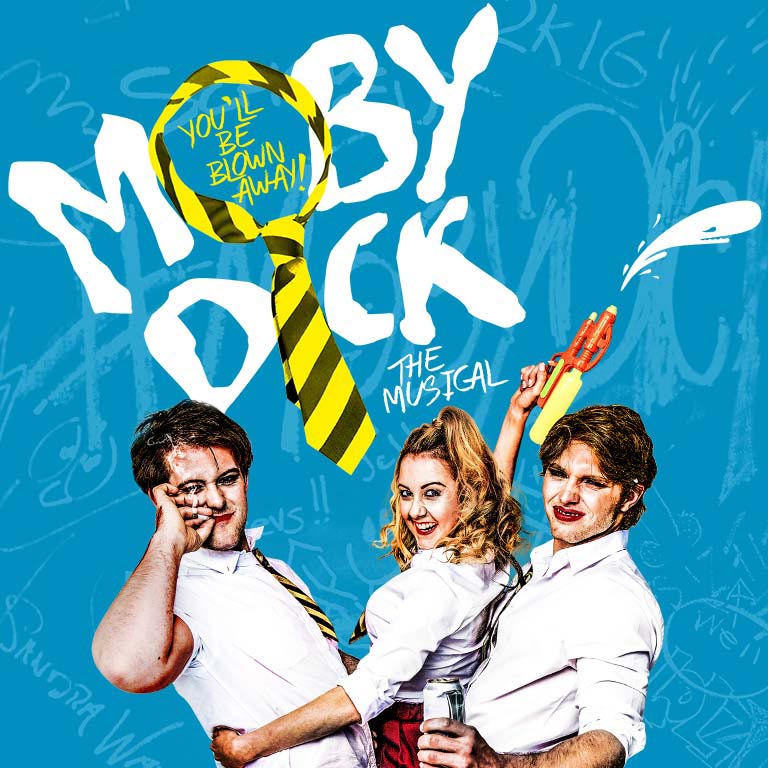 Type de série: Revival
Théâtre: Union Theatre (Londres - Angleterre) Durée : 3 semaines Nombre : Première Preview : mercredi 12 octobre 2016Première : mardi 18 octobre 2016Dernière : samedi 12 novembre 2016Mise en scène : Andrew Wright • Chorégraphie : Andrew Wright • Producteur : Avec : Anton Stephans, Brenda Edwards, Rachel Anne Rayham, Laura Mansell, Aimee Hodnett, Glen Facey, Sam Barrett, Rebekah Lowings, Pérola Congo and Grant McConveyCommentaires : Not seen in the UK since 1992, saucy cult hit 'Moby Dick! The Musical' is back. Originally produced by Cameron Mackintosh, 'Moby Dick! The Musical' has a book by Robert Longden and music and lyrics by Longden and Hereward Kaye.
The show was originally produced in London by Cameron Mackintosh following its premiere at the Oxford Old Fire Station. The show received scathing reviews and closed at the Piccadilly Theatre after just four months, and has since become a staple of regional and amateur theatre groups after being reworked into a brand new production.Commentaires longs: 'When I first put on Robert Longden and Hereward Kaye's irrepressible version of 'Moby Dick! The Musical' 25 years ago, London had virtually no Off West End theatre and the outrageous joy of shows like 'The Producers' and 'The Book Of Mormon' were still decades away. An unlikely alliance between Melville's great novel and the immortal St. Trinian's girls, 'Moby Dick! The Musical' is truly a whale of a tale. Im really delighted that Andrew Wright saw the show as a student in Oxford and has taken up his harpoon to bring Moby roaring back to the New Union Theatre with a wonderful diverse young cast of school 'girls' to holler 'Thar She Blows'!!'
The anarchic and nubile girls of St. Godley's Academy for Young Ladies are in trouble! Money for the school has run out and it's threatened with closure. Determined to save their school from bankruptcy, the resourceful girls, and their unflappable headmistress come up with a plan to keep the school afloat. Using whatever they can find, the girls mount an original production as a fundraiser - a musical version of Herman Melville's classic novel Moby Dick, featuring their own headmistress in the coveted role of Captain Ahab.
This brand new production, staged for the show's 25th Anniversary, is directed and choreographed by double Olivier Award nominee Andrew Wright.