An original cast album was announced by RCA Records but was cancelled when the show failed. RCA put up the majority of the money ($500,000).

Another leg of the pre-Broadway tour was set to play December 20 – January 6 at the Shubert Theatre in Philadelphia. Early in the Washington, DC run, producer David Merrick told the press that the show would shut down after its DC run for an overhaul. However, he decided it against it in early December and pulled out, offering the authors the chance to find other producers. That didn't happen and the production closed.

The production was scheduled for a January 13, 1968 opening at the Alvin Theatre on Broadway.

Merrick wanted the authors to turn the title character into a female James Bond story complete with the farce angle. The authors rejected this saying that the audience was gripped by the seriousness of the play and its anti-war message.

Merrick was approached several times to fire director Vincente Minnelli, including once after the first run-through of act one and again after the Washington opening. But he refused. (Minnelli had not directed anything on Broadway since 1939's Very Warm for May.)
Minnelli's direction sucked all of the sex out of the material and it became stuffy and tepid.
At least he kept his sense of humor. At a post-mortem following a preview, someone suggested sending out for coffee. Minnelli quipped, "I'll go."

The first preview has become legendary. It was performed before the Women's National Democratic Club (including Lynda Byrd Johnson, eldest daughter of the President).
The curtain rose at 9 and the performance ran until after midnight, scenery collapsed, wigs fell off, costumes became loose, dancers tripped over each other and star Marisa Mell was accidentally spotlit while nearly nude during a costume change. At the end of the evening, after Mell was executed by the firing squad, she was seen breathing heavily as she lay "dead" on the stage and scratching her forehead.
The entire evening was greeted with laughter and it ended with no curtain call.
The next day a Washington gossip column ran a story with the headline "Mata Hari Hilarious". 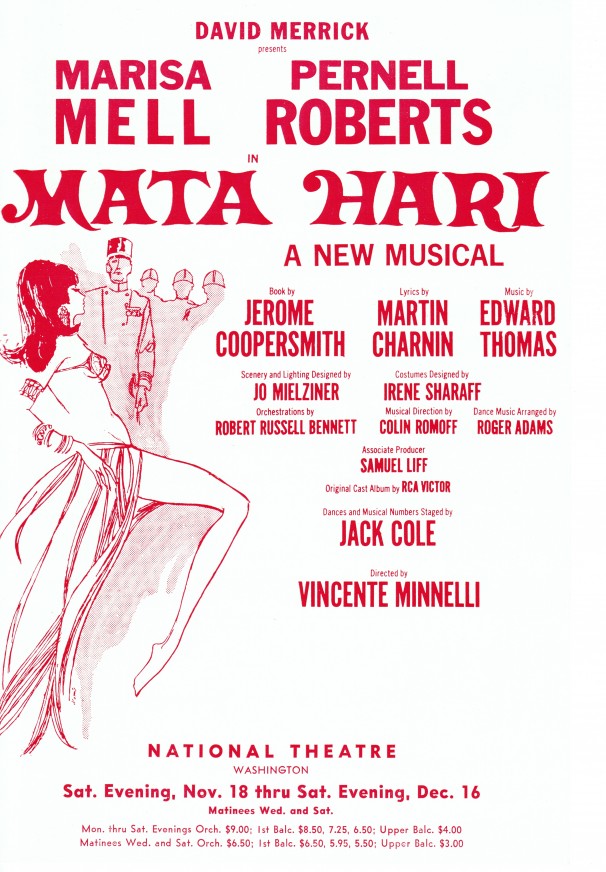