Development
The Australian production took five years of planning and over five months of rehearsals. Its director, Daniel Kramer, said that it took "three years of auditions and workshops" before performances began. He added, "It’s tempting to focus on the spectacle of King Kong himself. But it is only through the humanity of the life around him – the people of New York City, the comic megalomania of filmmaker Carl Denham, the stubborn opposition of first mate Jack Driscoll, and the grace, beauty and power of our leading lady, Ann Darrow – that he truly takes life."

The musical, according to the 2013 press notes, "has gone back to the source – the novella of the original film by Merian C. Cooper and Edgar Wallace."

Productions
An earlier version of the musical opened at the Regent Theatre in Melbourne, Australia on 15 June 2013, following previews from 28 May 2013. It featured a score by Marius de Vries, lyrics by Michael Mitnick and Craig Lucas, a book by Lucas, and additional music and lyrics by 3D, Sarah McLachlan, Guy Garvey, Justice and The Avalanches. The production was directed by Daniel Kramer and choreographed by John O’Connell.

Originally booking through 28 July 2013, the musical extended its booking period three times,[3] closing on 16 February 2014, after an almost nine-month run. The show was produced by Global Creatures, which partnered with animatronics workshop The Creature Technology Company, who designed the six-metre animatronic silverback title character.

Engineered, designed and built by Global Creature Technology in West Melbourne, Australia, the title role was the largest puppet ever created for the stage. The 2013 press notes stated that Kong was "a highly sophisticated animatronic/marionette hybrid that will be controlled by the integration of hydraulics, automation and the manual manipulation from a team of puppeteer/aerialists. ... A group of 35 on-stage and off-stage puppeteers work to manipulate the large-scale puppet. Several puppeteers are positioned on swinging trapezes and others launch themselves as counterweights off the puppet's shoulders to raise Kong's massive arms as he runs and swipes at planes during the performance. ... [The musical features] a cast of 49 actors, singers, dancers, circus performers and puppeteers; a crew of 76; and arguably the most technologically advanced puppet in the world – a one-tonne, six-metre giant silverback".

Broadway
The Broadway premiere of King Kong was originally scheduled to take place in 2014. Gerry Ryan of Global Creatures told Australian Radio Station 3AW in January 2014: "I was in New York recently and went to the theatre, and so, they're getting ready – Spider-Man: Turn Off the Dark's closed there at the Foxwoods and we'll be opening on 12 December 2014." Producers soon announced delays. By September 2014, Marsha Norman was engaged to rewrite the book.

In 2015, Jason Robert Brown was added to the team[9] "to write songs for the characters. There's a whole lot of music that already exists for King Kong." Formal presentations for the production began in February 2016.

The musical opened at the Broadway Theatre for previews on October 5, 2018, with the official opening on November 8.[14] The creative team includes book writer Jack Thorne, director-choreographer Drew McOnie, and Australian songwriter Eddie Perfect, who replace the former creatives.

Box Office
The play grossed just over a $1 Million during its opening week. 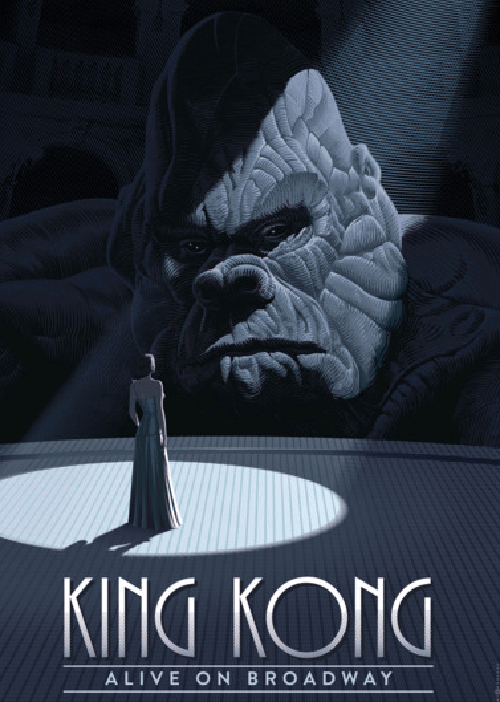 "The titular creation, designed by Sonny Tilders, is truly impressive: a 20-foot, 2,000-pound animatronic marvel that would be the pride of any amusement-park thrill ride." Adam Feldman for Time Out New York

"Director/choreographer Drew McOnie keeps the action moving well enough, starting with a knockout montage sequence, but after a while, the dancing starts to seem like a "Hamilton" rip-off. But none of that matters if seeing a giant life-like gorilla puppet on the stage is your idea of great theatre, and it is awesome. All others: enter at your own risk." Roma Torre for NY1

"Even if the star puppet might be better suited for an arena spectacle or theme-park attraction, you can't take your eyes off this technological marvel, not least for its incredible facial expressiveness. It's completely appropriate that the animatronic gorilla and its operators get the show's final bow." David Rooney for Hollywood Reporter

"It’s all about the 2,000-pound gorilla in the room, and this visually dazzling production delivers big time despite a mishmash of styles and generic tunes." Frank Rizzo for Variety