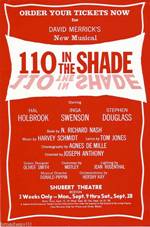 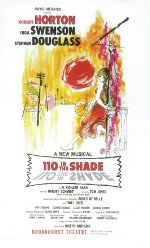 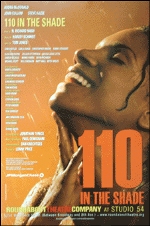 Type de série: Revival
Théâtre: Studio 54 (Broadway - Etats-Unis) Durée : 2 mois 3 semaines Nombre : 27 previews - 94 représentationsPremière Preview : vendredi 13 avril 2007Première : mercredi 09 mai 2007Dernière : dimanche 29 juillet 2007Mise en scène : Lonny Price • Chorégraphie : Dan Knechtges • Producteur : Presse : BEN BRANTLEY of THE NEW YORK TIMES: “Ravishing of voice and Olympian of stature, she’s (Audra McDonald) an overwhelming presence in an underwhelming show." / JOE DZIEMIANOWICZ of NEW YORK DAILY NEWS: "Audra McDonald proves once again she's more than a Broadway star - she's an entire constellation." / CLIVE BARNES of THe NEW YORK POST: "Despite the wondrous McDonald, a good supporting cast, Price's intelligent staging (backed by Dan Knechtges' lively choreography and admirably simple designs from Santo Loquasto), '110 in the Shade' remains a cold fish of a musical." / JACQUES LE SOURD of the JOURNAL NEWS: "This is hardly a winning revival of an old favorite." / MICHAEL SOMMERS of STAR-LEDGER: "Not a blockbuster musical, "110 in the Shade" is an unpretentious charmer and McDonald's shining performance lends the show an extra glow." / ELYSA GARDNER of USA TODAY: "McDonald's technique is meticulous, but its relentless precision and operatic vibrato can make her singing sound studied, particularly when the tunes have blues or jazz nuances. McDonald's acting, too, can seem self-conscious and overeager." / LINDA WINER of NEWSDAY: "In '110 in the Shade,' a sweetheart of a revival, McDonald bewitches us into forsaking the wattage of reality and believing that she's the plainest old maid in Texas." / ROBERT FELDBERG of the RECORD: "To prove that a single actor can turn a modest show into a compelling one, I offer as Exhibit A the performance by Audra McDonald." / ERIC GRODE of the NEW YORK SUN: "Audra McDonald has reclaimed her mantle as the era's premier musical-theater actress. Even when she's miscast, as in the Roundabout's capable new revival of '110 in the Shade,' Ms. McDonald is the anti-diva, incapable of singing a note or saying a word that in any way steals focus from or diminishes the material." / JOHN SIMON of BLOOMBERG: "Hottest of all may be the Lizzie of Audra McDonald. Not hitherto her fan, I was completely won over." & "What makes '110 in the Shade' exceptional is its first- rate score." / MICHAEL KUCHWARA of ASSOCIATED PRESS: "This Roundabout revival downsizes the musical a bit... But McDonald more than makes up for the paucity of production values. She's a performer who can fill any stage." / FRANK SCHECK of the HOLLYWOOD REPORTER: "A sweetly engaging work that's impossible to dislike, especially because it offers a wonderful leading role for four-time Tony Award winner Audra McDonald." / DAVID ROONEY of VARIETY: "This 1963 musical version of 'The Rainmaker' gets by on its charming score, old-fashioned romantic heart and, most of all, its magnetic lead, but the temperature rarely rises above that of a mild spring day." & "This is McDonald's show all the way, and she shines."