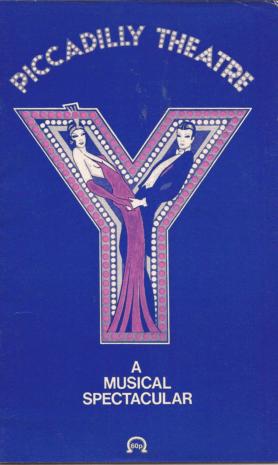 Type de série: Original
Théâtre: Piccadilly Theatre (Londres - Angleterre) Durée : 1 an 1 mois Nombre : Première Preview : lundi 27 juin 1983Première : lundi 27 juin 1983Dernière : samedi 28 juillet 1984Mise en scène : Jean-Marie Rivière • Chorégraphie : Molly Malloy • Avec : Arturo Brachetti, Nicola Kimber, Ward Alexander, Bunty Bailey, Patrick Kealey, Kit & The Widow, Fiona Lewis, Adrian Richard Swerhun, Gillian WinnCommentaires : In 1983, "I", this much-heralded “dinner theatre and cabaret” show was a “new” kind of entertainment. All the seats in the stalls had been removed and the evening started with a meal and some fringe entertainment from the waiters. Later (a kind of “second doors”) the non-eating public were admitted to the circles and the cabaret began.
The show was built around a series of spectacular magic tricks by the young quick-change artist, Arturo Brachetti. The auditorium walls were covered in “eyes” - reflecting the name of the show. Some of the complicated tricks failed to work properly, technically things kept falling apart - even the serving of the food failed to finish in time for the proposed start of the show. The production was withdrawn,and completely re-directed and re-staged. Given a new title “Y”, it opened two months later.
The new production worked much better. Arturo Brachetti, who was said to change costume 80 times in the show, and all the grand illusions were successfully staged. The show featured things like a Dracula-type scene where Veronica of Battersea is sawn in half by the wicked Count Alboretto, and then a chorus of heavenly fairies attempt to put the pieces back together again; a Venetian scene with gondolas and Casanova; a Pierrot scene with a flying Pierrot; a Ziegfeld-meets-Crazy-Horse scene with scantily clad tigers and panthers and a lot of whipping; some original music and a lot of miming to “standards”. All over the theatre were a series of eyes that lit up and winked throughout (these were left over from the previous incarnation “I”.) It was all very spectacular, exotic and over the top. No one quite knew what to make of it, but its sheer novelty value proved to be an attraction and it ran for a year. Arturo Brachetti was nominated for a Society of West End Theatre Award.Plus d'infos sur cette production:
Plus d'infos sur ce musical: