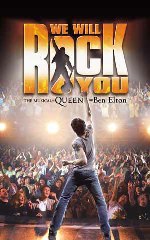 Type de série: Original
Théâtre: Dominion Theatre (Londres - Angleterre) Durée : 12 ans 2 semaines Nombre : Première Preview : vendredi 26 avril 2002Première : mardi 14 mai 2002Dernière : samedi 31 mai 2014Mise en scène : Christopher Renshaw • Chorégraphie : Arlene Phillips • Avec : Sharon D Clarke (Killer Queen), Alexander Hanson (Khashoggi), Tony Vincent (Galileo), Hannah Jane Fox (Scaramouche), Nigel Clauzel (Britney), Kerry Ellis (Meat), Mazz Murray, Golda Rosheuvel.Commentaires : The 2,000 seat Dominion was filled with enough hi-tech plasma screens, lasers and massive pyrotechnic effects to fill a techno trade fair. The show had clearly cost a fortune and would need to do huge business to cover its costs. Its chances were rated at nil. It received some of the worst notices ever, including remarks like: "Ben Elton should be shot for this risible story”, “sticky goo", “Utterly preposterous”, “ a disastrous excuse for a musical”, “the show should die of chronic embarrassment”, “precious little rhapsodic here”, “a pathetic adolescent piece of work”, “don’t give them your money”. (However, some individual performances received praise).
“We Will Rock You” went on to became the longest running musical at that venue, et se joue toujours dix ans plus tard! (Like the damning reviews for “Charlie Girl” in 1965, and the gloomy predictions for “Les Miserables” in 1985, it only goes to show the critics do not always get it right.)Presse : "A super high energy show with a wacky story that all Queen fans will love." Darren Dalglish for Londontheatre.co.uk
"The script remains little more than two-minute blasts of knob gags and misplaced polemic between songs, and the musical numbers have nothing to do with the script. " Caitlin for The Times
"[Ben] Elton, when he gets his feet out of the sticky goo of this cloying parable, has the odd line which, without causing any action in the ribcage department, does promote smile lines." Peter Clarke for THe Evening Standard
"Ben Elton, the brains behind the book, claims to be a rock fan but he has done Queen a disservice with such a trite and tacky storyline." Fiona Sturges for The Independent
"Shallow, stupid and totally vacuous new musical." Michael Coveney for THe Daily Mail
"Far from being guaranteed to blow your mind, We Will Rock You is guaranteed to bore you rigid. The show is prolefeed at its worst." Charles Spencer for Daily Telegraph
"The songs are recreated meticulously. Diehard Queen fans may be satisfied...You will find nothing bohemian, and precious little that's rhapsodic, here." Brian Logan for The Guardian
"Not even the toe-curling subtext could make a musical with Bohemian Rhapsody completely bite the dust." Chris Bartlett for the Stage