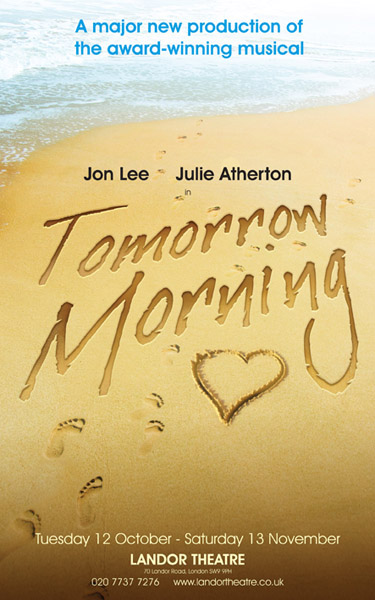 Type de série: Revival
Théâtre: Landor Theatre (Londres - Angleterre) Durée : 3 semaines Nombre : Première Preview : mardi 12 octobre 2010Première : mardi 19 octobre 2010Dernière : samedi 13 novembre 2010Mise en scène : Robert McWhir • Chorégraphie : Avec : Grant Neal (Jack), Yvette Robinson (Catherine), Jon Lee (John), Julie Atherton (Kat)Commentaires : Originally staged at the New End Theatre in July 2006, this was a re-written version. The basic plot still involved two couples respectively about to tie and untie the marriage knot. Jack and Catherine are the older divorcing pair, and John and Kat are getting married in the morning. In the revised version, on the eve of their wedding, Kat finds out that she is pregnant. When she informs Jack, he walks out on her. Catherine and John are arguing about their divorce settlement when Adam, their 10-year-old son, disappears, causing the couple to realize that they still care for each other. The plot still ends with the two couples being the same people: John and Kat are Jack and Catherine's memories of their younger selves. Jack returns to Kat and they marry, and John and Catherine reconcile, as love conquers all. This re-written version received excellent notices.Presse : Lyn Gardner in The Guardian said that much of the score for Tomorrow Morning was "sublime, and sublimely delivered". She gave the show three and a half stars.
Time Out London gave the show four stars and made it Critics Choice.
Michael Coveny in The Independent had less glowing praise for the show itself but pointed out Wythe's skill as a composer and lyricist and his potential for the future.
Paul Vale in The Stage called the show "thoughtful and intelligent".
Mark Shenton, in the Sunday Express described the show as "coolly adult, neatly propelled by an earnest song cycle".