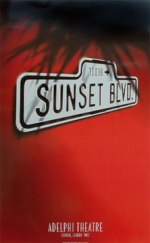 Early in 1997, Andrew Lloyd Webber announced the immediate closure of both the West End and Broadway productions, claiming it was impossible to find cast replacements of sufficiently high quality. (Later it was disclosed the whole undertaking had lost an absolute fortune and was seriously impacting on the overall finances of Lloyd Webber’s Really Useful Company. The sum of money paid to Faye Dunaway for breach of contract when she was sacked from the USA version was never disclosed, but it was claimed that Patti LuPone, initially promised the Broadway run, sued Lloyd Webber and received a settlement reported to be $1 million.
According to Broadway critic Frank Rich in his book “The Hot Seat”, these lawsuits contributed to “Sunset Boulevard” setting the record for the biggest loss ever made on a musical show. The operating costs exceeded the income, and the touring companies also generated large financial losses. In spite of running for more than two years and selling over a million tickets on Broadway, Rich puts the final losses near or above $20 million.

Théâtre: Adelphi Theatre (Londres - Angleterre) Durée : 8 mois Nombre : Première Preview : lun. 12 juillet 1993Première : lun. 12 juillet 1993Dernière : sam. 12 mars 1994Mise en scène : Trevor Nunn • Chorégraphie : Bob Avian • Avec : Patti LuPone (Norma Desmond), Kevin Anderson (Joe Gillis), Meredith Braun (Betty Schaefer), Daniel Benzali (Norma's ex-husband, Max)Commentaires : Billy Wilder and his wife Audrey were joined by Nancy Olson, who had played Betty Schaefer in the original film, at the opening night performance. Of it, Wilder observed, "The best thing they did was leave the script alone," and of Patti LuPone he exclaimed, "She's a star from the moment she walks on stage."
Reviews were mixed…
The show closed for three weeks, re-opening on 19 April 1994, revamped to follow the Los Angeles production, with a second official "opening".Presse : the review by Michael Kuchwara for the AP: "Some reviewers felt Lloyd Webber took the sting out of a cynical tale. 'Wilder's bitter brew has been diluted,' wrote AP Drama Critic Michael Kuchwara. He added: 'When LuPone is off stage, the show sags.'"
Frank Rich wrote "Much of the film's plot, dialogue and horror-movie mood are preserved, not to mention clips used to illustrate those sequences in which the faded silent-film star, Norma Desmond ...and her kept young screenwriter, Joe Gillis ..., travel by car. The lyricist, Don Black ..., and the playwright, Christopher Hampton ..., smartly tailor their jokes to the original screenplay's style. At times even Lloyd Webber gets into the Wilder swing. Both acts open with joltingly angry diatribes about Hollywood, part exposition-packed recitative and part song, in which the surprisingly dark, jazz-accented music, the most interesting I've yet encountered from this composer, meshes perfectly with the cynical lyrics. Anderson makes the sardonic Wilder voice an almost physical presence in Sunset Boulevard. But that voice is too often drowned out by both LuPone's Broadway belt and by the mechanical efforts of Lloyd Webber and his director, Trevor Nunn, to stamp the proven formulas of Phantom and Les Miz on even an intimate tale. At odd moments the mammoth set advances like a glacier toward the audience or retreats or, most dramatically, rises partly up into the flies, actors in tow."

Petula Clarck
9 jan 1996 - 5 avr 1997
(out du 9 sept - 2 nov 1996, remplacée par Rita Moreno)Commentaires : Buckley then followed Glenn Close as Norma Desmond in the second year of the Broadway production. Elaine Paige, who had filled in when Buckley was ill in 1994, took over as Norma Desmond in the West End in May 1995 before joining the Broadway production for the end of its run between 1996 and 1997. Petula Clark filled in for Paige during her holiday in September/October 1995, before taking over the role in January 1996 when Paige departed for the United States. The last "star" to take on the role of Norma Desmond in London was Rita Moreno, who filled in for a vacationing Clark in September and October 1996. John Barrowman played Joe until 1995, when he was replaced by Alexander Hanson. Graham Bickley played the role for the final year of the London run.
The show closed on 5 April 1997, running for 1,530 performances.Presse : The show closed for three weeks, re-opening on 19 April 1994, revamped to follow the Los Angeles production, with a second official "opening". The revamped musical had a new song, "Every Movie's A Circus", a new set, and new stars, Betty Buckley and John Barrowman. Michael Bauer, who had played DeMille in the original production replaced Benzali as Max, a role he played until the end of the London run (and subsequently on the UK tour and the BBC concert) and Anita Louise Combe (also from the original cast, understudying the role of Betty Shaeffer for the first nine months – and subsequently went on to play Betty Schaeffer in the Canadian Premiere with Diahann Carroll). Buckley and the production garnered rave reviews. David Lister of The Independent, for example wrote: "The show looked an improvement on the one that got decidedly mixed reviews last summer."