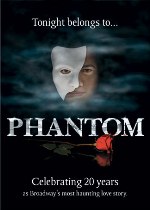 Andrew Lloyd Webber's world renowned rock opera adaptation of Gaston Leroux's novel won the 1988 Tony Award for Best Musical and has gone on to become the longest-running show in Broadway history, playing over 10,000 performances and running for over a quarter of a decade!

This updated musical masterpiece combines both quality musicality with a darkly romantic story that leaves you on the very edge of your seat. Combine the world-class casting with breathtaking theatrical effects, and you have a musical phenomenon that has enthralled audiences across generations all around the world.

Did you know?
Phantom is THE longest-running Broadway musical, having clocked up over 27 years and in 2013 celebrated its 25th anniversary with its 10,400th performance. Bets are currently being taken at New York City Theater Towers, on how many performances will be played by 2018, which the show's 30th anniversary!
Presse : "It may be possible to have a terrible time at The Phantom of the Opera, but you'll have to work at it. Only a terminal prig would let the avalanche of pre-opening publicity poison his enjoyment of this show, which usually wants nothing more than to shower the audience with fantasy and fun, and which often succeeds, at any price. The physical production, Andrew Bridge's velvety lighting included, is a tour de force throughout—as extravagant of imagination as of budget." Frank Rich for New York Times

"It is a spectacular entertainment, visually the most impressive of the British musicals. Perhaps the most old-fashioned thing about it is it's a love story, something Broadway has not seen for quite a while. To say the score is Lloyd Webber's best is not saying a great deal. His music always has a synthetic, borrowed quality to it. As you listen you find yourself wondering where you've heard it before. In this case you've heard a lot of it in Puccini, in the work of other Broadway composers and even the Beatles. Nevertheless he seems to be borrowing from better sources, and he has much greater sophistication about putting it all together. There are some droll opera parodies, several beautiful songs, an impressive septet and a grand choral number, all richly orchestrated." Howard Kissel for New York Daily News

"Technically it is a piece of impeccably crafted musical theater, with theme, music and staging in perfect accord. They combine as a total statement that depends for its potency more on the sum of its parts than on the strength of any individual component." Clive Barnes for New York Post

"The London audiences aren't wrong. "The Phantom Of The Opera" is romantic musical theater hokum in the grand manner - hokum cordon blue - and it justifies the feverish buildup that has given it a $16,500,000 advance. It's good for a Broadway run of several years. Andrew Lloyd Webber has taken the Gaston Leroux potboiler about the love-crazed disfigured genius who lives in the catacombs of the Paris Opera and fashioned it into a thrilling and musically rich mass legit entertainment. The 19th century period spectacle, scenic legerdemain, soaring melodies and exceptional singing are at the service of an involving and piquantly offbeat love story, all of it staged with brilliantly organized flair by Harold Prince, back in top form." Richard Hummler for Variety