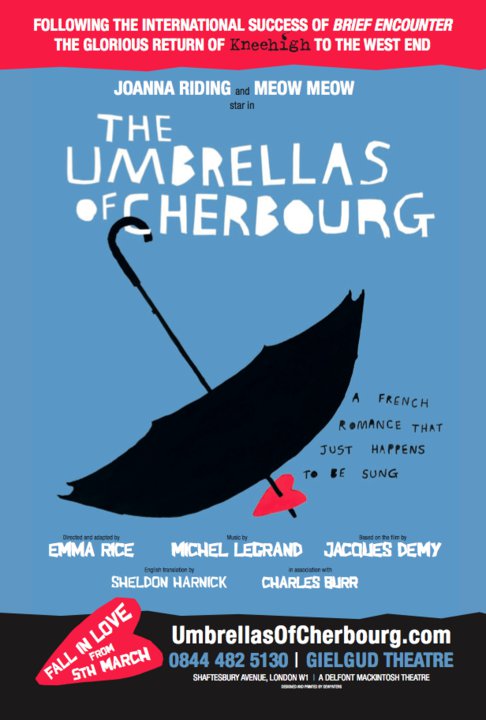 Type de série: Revival
Théâtre: Gielgud Theatre (Londres - Angleterre)
Durée : 1 mois 4 semaines Nombre : 71 représentationsPremière Preview : samedi 05 mars 2011Première : mardi 22 mars 2011Dernière : samedi 21 mai 2011Mise en scène : Emma Rice • Chorégraphie : Emma Rice • Avec : Meow-Meow (Maitresse), Carly Bawden (Genevieve), Andrew Durand (Guy), Joanna Riding (Madame Emery), Dominic Marsh (Aunt Elise), Gareth Charlton, Aki Omoshabyi & Matt Willman (Sailors and Puppeteers), Cynthia Erivo, Laura Brydon, Gillian Budd, Chris Jenkins.Commentaires : This was a completely new adaptation of the Jacques Demy film “Les parapluies de Cherbourg”, which had been a complete flop in London in 1980. This new version fleshed out the story, framing it with a “narrator” in the person of Meow Meow, the cabaret artist, and rather bizarrely casting a man in the role of Guy’s Aunt Elise, as well as frequent use of a trio of hunky dancing French sailors. Like the film it remained a “sung-through” piece with a lot of sung dialogue. With the use of puppets, UV scenery, a toy car, it tended to mystify the critics rather than annoy them. It was created by the same team that had translated the film “Brief Encounter” into a West End and Broadway stage success. However, this time they failed. It had opened for try-outs at Leicester’s Curve Theatre in February, and began previews at the Gielgud on March 5th. Originally advance bookings were being accepted up to October 1st, but the show was taken off on May 21st - after an eight week run.Presse : "It's all rather insipid and bitty - the film's colour is lost, and little is added."
Henry Hitchings for The Evening Standard

"Watching the stage version is like seeing a Technicolor film rendered in black and white...A strangely prosaic attempt to capture the elusive poetry of the Demy original."
Michael Billington for The Guardian

"There is only one decent song amid the interminable recitative. Legrand’s I Will Wait for You is certainly a dreamily romantic melody, but a musical with only one great number seems to me to be short-changing its audience...I found this an impossible show to love. Even the poignant ending feels like too little, too late. "
Charles Spencer for The Daily Telegraph