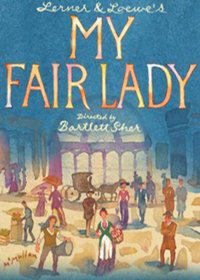 Marking the first Broadway revival in 25 years, the brand new production is directed by Tony Award winner Bartlett Sher and is another shining example of Sher doing what Sher does best. Following his tremendous successes with South Pacific and The King and I, he has created yet another lavish and nostalgic representation of a timeless classic. With grand sets and elaborate costumes most directors would die for and rousing musical numbers galore, the audience is spoilt by an embarrassment of riches. Sher's interpretation of the ending of the piece may also surprise some attendees, but is actually more in line with the musical's original source material - George Bernard Shaw's Pygmalion. Kudos to Lincoln Center Theater for once again proving itself as the frontrunner in staging Broadway musical revivals.
Presse : "The plush and thrilling Lincoln Center Theater revival or Lerner & Loewe's My Fair Lady reveals Eliza Doolittle as a hero instead of a puppet — and reveals the musical, despite its provenance and male authorship, as an ur-text of the #MeToo moment. Indeed, that moment has made My Fair Lady, which had its Broadway premiere in 1956, better than it ever was." Jesse Green for New York Times

"Broadway’s My Fair Lady takes you to showtune heaven in a new production that’s both opulent and daring." Joe Dziemianowicz for New York Daily News

"We’ve grown accustomed to the grace of Bartlett Sher’s revivals of American stage classics, but that doesn’t mean we should take them for granted. Working in blessed harmony with his trusty creative team—including set designer Michael Yeargan and costumer Catherine Zuber—Sher is not an iconoclast or radical re-sculptor; instead, he acts as a restorer, leaving the shows on their pedestals but stripping off years of obscuration to reveal layers the works have possessed all along. So it is with the splendid new Lincoln Center Theater revival of My Fair Lady." Adam Feldman for Time Out New York

"There's a breathtaking visual in Lincoln Center Theater's new My Fair Lady when Lauren Ambrose emerges as Eliza Doolittle, transformed from common-as-muck flower girl into regal stunner, done up to attend the posh Embassy Ball... Comparable delights intoxicate the eyes and ears throughout this sumptuous staging from Bartlett Sher, a director who has proved to be among the very best at chiseling surprising nuance out of vintage musicals." David Rooney for Hollywood Reporter

"If you’ve got it, flaunt it. The splendid Beaumont stage at Lincoln Center was made for great classic musicals like Lerner and Loewe’s My Fair Lady, and helmer Bartlett Sher was born to stage them. This jubilant revival is meticulously mounted and entirely welcome – despite the eccentric casting choice of Lauren Ambrose as Eliza Doolittle." Marilyn Stasio for Variety