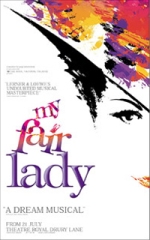 SHERIDAN MORLEY for TELETEXT says the show is "sharp and sturdy".He goes on to say, "Matthew Bourne's choreography is brilliant.."

MICHAEL COVENEY for THE DAILY MAIL, describes McCutcheon's performance as "bubbly, bright and immensely endearing". He goes on to say, "In Jonathan Pryce's Higgins we have a major performance by a major actor." He finishes with describing the show as "Wonderfully theatrical."

CHARLES SPENCER for THE DAILY TELEGRAPH says, "Pryce combines commanding authority with charm and delivers the songs with far more panache than Rex Harrison." He goes on to say, "The night belongs to McCutcheon."

BENEDICT NIGHTINGALE for THE TIMES says, "A success to rival the National's Oklahoma!."

MICHAEL BILLINGTON for THE GUARDIAN says, "The first half of the evening is shamelessly enjoyable. But after the interval, doubts crowd in about the show and the production."

ROBERT GORE-LANGTON for THE DAILY EXPRESS says, "It's effortlessly enjoyable."

RHODA KOENIG for THE INDEPENDENT says, "Trevor Nunn's show crackles like a house on fire."