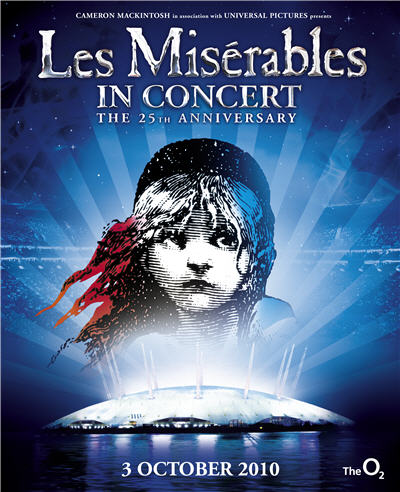 Type de série: Concert
Théâtre: O2 Arena (Londres - Angleterre) Durée : Nombre : 2 représentationsPremière Preview : dimanche 03 octobre 2010Première : dimanche 03 octobre 2010Dernière : dimanche 03 octobre 2010Mise en scène : Laurence Connor • James Powell • Chorégraphie : Avec : A company of over 300 actors and musicians, including Ramin Karimloo (Enjolras), Samantha Barks (Eponine), Alfie Boe (Jean Valjean), Nick Jonas (Marius), Norm Lewis (Javert), Matt Lucas (Ténardier), Lea Salonga (Fantine), Jenny Galloway (Madame Thénardier), Camilla Kerslake (Cosette, Mia Jenkins (Young Cosette ), Robert Madge (Gavroche), Earl Carpenter (Bishop of Digne) and the casts of the Original Production at the Queen's Theatre, the New 25th Anniversary Production at the Barbican, London and members of the Original 1985 London cast.Commentaires : Casts of the current London, international tour and original 1985 London productions took part, comprising an ensemble of three hundred performers and musicians This special concert celebrating the show’s 25 th anniversary was marked by the increasingly bitter dispute between Cameron Mackintosh and Trevor Nunn, the original director. Sir Trevor’s sense of betrayal seems to have grown since he was not appointed to direct the new touring version and has deepened because he is not directing this special two-performance concert. Asked if he and Sir Trevor were on speaking terms, Sir Cameron said: "No, actually, and given that Trevor Nunn is about to take over the chair this month of my professorship at Oxford, I just think Trevor's been very silly. Trevor is entitled to his own opinion, but it's sad. He hasn't actually directed Les Miserables on his own, or at all really, since 1987. I sent him a little note saying, 'Don't be so silly. Your memory is as bad as your manners'. But listen, I've got nothing to talk to him about. Trevor sees the world the way he sees it." Sir Cameron said that co-director John Caird, unlike Sir Trevor, has been "an utter gentleman" about things.