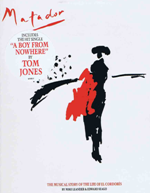 Type de série: Original
Théâtre: Sondheim Theatre (Londres - Angleterre)
Durée : 3 mois 1 semaine Nombre : 119 représentationsPremière Preview : mardi 16 avril 1991Première : mardi 16 avril 1991Dernière : samedi 27 juillet 1991Mise en scène : Elijah Moshinsky • Chorégraphie : Arlene Phillips • Avec : John Barrowman (Domingo Hernandez), Stefanie Powers (Laura-Jane Wilding), Nicky Henson (El Panama), Jackie Dunn (Graciella), Caroline O’Connor (Consuelo), Alexander Hanson (Tomas), Kevin A.J. Ranson (Miguel), Franciso Perez Arevalo (The Bull)Commentaires : Based on “Or I’ll Dress You in Mourning”, the biography of the Spanis bullfighter El Cordobés by Larry Collins and Dominique Lapierre, this show began as a concept album recorded by Tom Jones in 1987. Originally Tom Jones was planned to star in a stage version, but this did not work out, and his role was taken by John Barrowman.
The show had spectacular sets and superb flamenco dancing, and everyone agreed it was one of the best dance shows ever seen on the London stage. However, with animal rights protesters outside the theatre each night claiming the show glorified bullfighting, the controversy surrounding the show did not help. Neither did a much derided scene in which the matador and bull sing a duet in which they declare that they have much in common, both being trapped, exploited and destined for death. It closed after three months with losses of around £1 million.