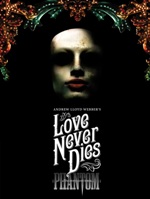 Type de série: Original
Théâtre: Adelphi Theatre (Londres - Angleterre) Durée : 1 an 5 mois 2 semaines Nombre : Première Preview : lundi 22 février 2010Première : mardi 09 mars 2010Dernière : samedi 27 août 2011Mise en scène : Jack O'Brien • Chorégraphie : Jerry Mitchell • Avec : Ramin Karimloo (Phantom ), Sierra Boggess (Christine Daaé), Joseph Millson (Raoul), Liz Robertson (Mme Giry), Summer Strallen (Meg), Niamh Perry (Fleck), Adam Pearce (Squelch), Jami Reid-Quarrell (Gangle)Commentaires : The musical opened with previews on 22nd February 2010, originally directed by Jack O’Brien and with lyrics by Glenn Slater. Although it was praised for its lavish staging, and received a few excellent notices, it was generally felt to be clunky and exceptionally dark and gloomy. It was rapidly nicknamed “Paint Never Dries”. Later in the year a new version was rehearsed simultaneously with the evening performances and the show closed for four days in November 2010 for substantial re-writes. It re-opened with new direction from Bill Kenwright, new choreography from Bill Deamer, and some new lyrics by Charles Hart. The London production closed on 27 August 2011 after a disappointing run of fewer than eighteen months.Presse : "There is much to enjoy in Andrew Lloyd Webber's new musical. The score is one of the composer's most seductive. Bob Crowley's design and Jack O'Brien's direction have a beautiful kaleidoscopic fluidity. And the performances are good. The problems lie within the book, chiefly credited to Lloyd Webber himself and Ben Elton, which lacks the weight to support the imaginative superstructure...In short, the show has much to commend it and the staging is a constant source of iridescent pleasure. But, as one of the lyrics reminds us, 'diamonds never sparkle bright unless they are set just right'. Although Lloyd Webber's score is full of gems, in the end a musical is only as good as its book. With a libretto to match the melodies, this might have been a stunner rather than simply a good night out."
Michael Billington for The Guardian

"Dismally implausible plot...The blogosphere has been teeming with views of Lloyd Webber’s long-awaited Phantom II. For some, Love Never Dies is 'Paint Never Dries', and for others the composer is at his musical best. I tend to agree with both factions....Bob Crowley (Designs] successfully evokes much of Phantasma, helped by projections of spooky horses on carousels. Yet that’s all rather cursory, as is the choreography, which doesn’t amount to a lot more than the inevitable bathing beauties bouncing about on the beach. "
Benedict Nightingale for The Times

"Lloyd Webber’s finest show since the original Phantom, with a score blessed with superbly haunting melodies and a yearning romanticism that sent shivers racing down my spine....The show may ultimately prove too strange, too dark, too tormented to become a massive popular hit, but I suspect its creepy allure will linger potently in the memory when frothier shows have been long forgotten. "
The Daily Telegraph

"What is in no doubt is the technical excellence of Jack O'Brien's seamlessly fluent, sumptuous (and sometimes subtle) production, or the splendour of the orchestra which pours forth Lloyd Webber's dark-hued, yearning melodies as if its life depended on them."
Paul Taylor for The Independent

"It doesn’t really smoke into life until the 20th minute and even then it splutters for a while. Finally, the singing and the ingenious staging combine to show the Lloyd Webber orchestration to its full glory, but, boy, it takes an age."
Quentin Letts for The Daily Mail

"While Lloyd Webber’s music is at times lavishly operatic, the tone is uneven. There are no more than a couple of songs that promise to live in the memory, the duets don’t soar, and the ending is insipid. Admirers of Phantom are likely to be disappointed, and there’s not enough here to entice a new generation of fans."
Henry Hitchings for The Evening Standard

"Sets and special effects cannot be faulted, the singing is terrific...a stunning ending. But phantastic? Afraid not."
Bill Hagerty for The Sun

"Musically, it is pleasing enough...Visually, the show is stunning in places."
Matthew Hemley for The Stage

"This is an elegant and clever sequel to Phantom...It is a great night out."
Paul Callan for The Daily Express

"While lushly orchestrated (by David Cullen with Mr. Lloyd Webber), the score is, for the most part, so slow that you have time to anticipate Mr. Slater’s next leaden rhyme. Each of the songs — which range from bathing-beauty frolics to power-chord operetta ballads — spins a single tune until it loses its tread."
Ben Brantley for The New York Times

"Frequently clunky and clumsy...Lloyd Webber's score, too, seems like a rehashed parade of pastiche and throbbing crashing-chord melodies."
Mark Shenton for Entertainment Weekly

"Watching the sequel only makes you appreciate the achievement of the original."
David Benedict for Variety

"The musical is impressive and enjoyable, even with its heavy hokum and creakiest of plots."
Warwick Thompson for Bloomberg News