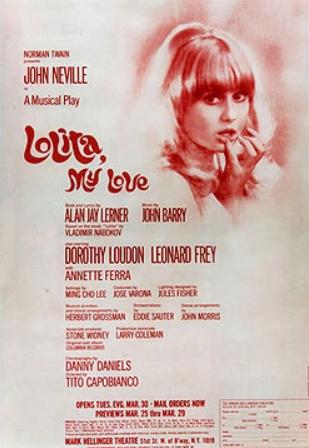 Scheduled to open March 30, 1971 at the Mark Hellinger Theatre. When the show ran into problems in Philadelphia and the Boston tryout had to be added, the opening was pushed to April 13. On March 30, three days after the tryout in Boston ended, lyricist/book writer Alan Jay Lerner and producer Norman Twain announced that the opening would again be postponed as "the show needed additional revisions".
The production lost $900,000.
In December 1970, Lorna Luft was cast, although unclear about who she would play.
The 5-week Philadelphia tryout cut short on Feb. 27 for revisions.
In a Feb. 25 program, Dan Siretta is listed as a character named Quincey. Irwin Pearl played Nelson Quimby. Dan Siretta is also listed as part of the dancing ensemble. This is the only program in which they were credited.
The character of Mrs. Thornbush was eliminated after Philadelphia (played by Fran Stevens). She was the head of the summer camp where Humbert picks up Lolita. The camp counsellors were played by Jacqueline Johnson, Jacqueline Britt, and Jacque Dean.