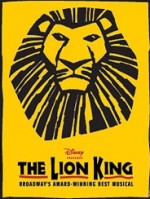 WELCOME TO THE LION KING!
Since opening on Broadway in 1997, The Lion King has smashed records left and right, and today stands as the highest grossing show or film in box office history. To date, it's played over 7500 performances on Broadway and has mounted numerous productions worldwide. The success is well deserved as the musical is a visually stunning affair, creating a realistic and thrilling landscape, with the actors fully immersing themselves in their animal roles.
Whether you want to see the spectacle for yourself for the first time, or are a returning visitor, you can be sure that this is a musical that the whole family can enjoy!

DID YOU KNOW?
If you combine all of the productions of the show world wide together, The Lion King has been running for 90 years!Presse : "Seen purely as a visual tapestry, there is simply nothing else like it. Suddenly, you're 4 years old again, and you've been taken to the circus for the first time. You can only marvel at the exotic procession of animals before you: the giraffes and the elephants and the hippopotamuses and all those birds in balletic flight. Such is the transporting magic wrought by the opening 10 minutes of The Lion King, [director Julie] Taymor has introduced a whole new vocabulary of images to the Broadway blockbuster." Ben Brantley for New York Times

"Julie Taymor's staging of Disney's The Lion King is a marvel, a theatrical achievement unrivaled in its beauty, brains and ingenuity. Leaping far beyond its celluloid inspiration, the stage version improves upon nearly every aspect of the hit 1994 animated film, from visual artistry and storytelling to Lebo M's score and the newly African-ized pop songs of Elton John and Tim Rice." Greg Evans for Variety

"A jaw-dropping magnificent spectacle. The show and the playhouse are enchanting. The unprecedented production is worth every penny. If this is Disney's idea of a theme park, we are delighted to report that the theme is quality." Linda Winer for Newsday

"Awe-inspiring! Broadway theater is alive again. [Julie] Taymor's imaginative ideas seem limitless. it's a gorgeous, gasp-inducing spectacle. Most important - against all odds - it has innocence. The show appeals to our primal, childlike excitement in the power of theater to make us see things afresh." Richard Zoglin for Time Magazine

"The breathtakingly staged Broadway adaptation of Disney's king of the cartoon jungle is an instant theater classic." Chris Willman for Entertainment Weekly