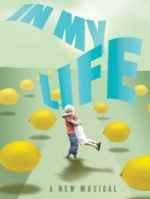 Type de série: Original
Théâtre: Music Box Theatre (Broadway - Etats-Unis) Durée : 1 mois 3 semaines Nombre : 23 previews - 61 représentationsPremière Preview : vendredi 30 septembre 2005Première : jeudi 20 octobre 2005Dernière : dimanche 11 décembre 2005Mise en scène : Joseph Brooks • Chorégraphie : ???? ???? • Presse : BEN BRANTLEY of the NEW YORK TIMES says “I dreamed I went to a Broadway show that was supposed to be madly eccentric and surreal, featuring a giant lemon, transvestite angel and a hero with Tourette's syndrome. But then, in one of those head-spinning shifts of setting that occur only in nightmares, I found mystrapped inside a musical Hallmark card, a pastel blend of the twinkly teddy bear and sentimental sunrise varieties. And suddenly, as the breath was leaving my body, I realized I was drowning, drowning in a singing sea of syrup.”
HOWARD KISSEL of the NEW YORK DAILY NEWS says "Rarely have I felt as keen a sense of anticipation in an audience as I did at Joseph Brooks' "In My Life." Advance word had it that this musical, by the composer of "You Light Up My Life," was going to be a disaster of legendary proportions. The letdown came early. "In My Life" is awful, but as disasters go, it's minor league."
CLIVE BARNES of THE NEW YORK POST says "Fulfills every unpromise possible. In fairness, there is at times a kind of crazy professionalism lurking around in the wings that seems determined never to make it onstage."
MICHAEL SOMMERS of STAR-LEDGER says "A professional crew of performers and designers do their darnedest to make this bizarre thing fly. Now and again, the musical manages to take off for a few minutes. While this un-reality show never really wings to anywhere profound, its tuneful high points can be weirdly enjoyable."
JACQUES LE SOURD of the JOURNAL NEWS says "A picture of a giant lemon serves as the musical's final backdrop. An extremely close textual study of the script uncovers no explanation for this, other than J.T.'s declaration that "Lemon is something I say when I'm feeling good." Unfortunately, it's something a critic says when he's feeling queasy."
MICHAEL KUCHWARA of ASSOCIATED PRESS says "It's more fun to talk about "In My Life," the bizarre new musical at Broadway's Music Box Theatre, than actually sit through it."