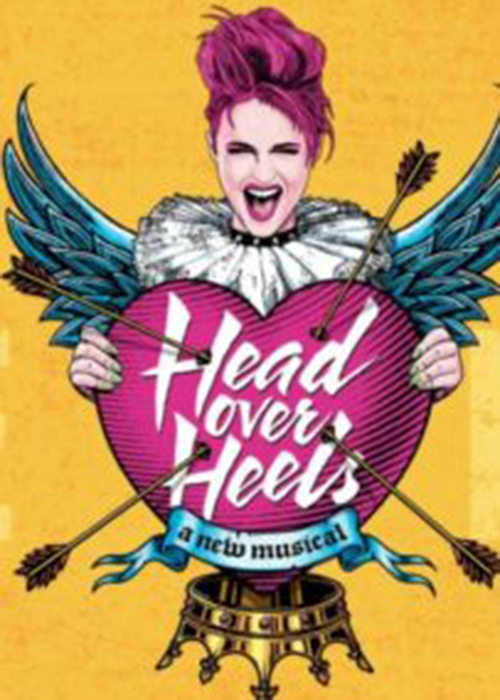 Type de série: Original
Théâtre: Hudson Theatre (Broadway - Etats-Unis) Durée : 5 mois 2 semaines Nombre : 37 previews - Première Preview : samedi 23 juin 2018Première : jeudi 26 juillet 2018Dernière : dimanche 06 janvier 2019Mise en scène : Michael Mayer • Chorégraphie : Avec : Andrew Durand (as Musidorus), Taylor Iman Jones (as Mopsa), Jeremy Kushnier (as Basilius), Bonnie Milligan (as Pamela), Peppermint (as Pythio), Tom Alan Robbins (as Dametas), Alexandra Socha (as Philoclea), and Rachel York (as Gynecia)Presse : "You would think that a sexually polymorphous musical that combines a Renaissance pastoral romance with the songs of the 1980s Califoria rock group The Go-Go's would at the very least be a hoot, a show that could get sloppy drunk on its own outrageousness. Yet Head Over Heels, which opened on Thursday night at the Hudson Theatre, feels as timid and awkward as the new kid on the first day of school. Make that the new kid who longs to run with the wild crowd but can’t quite commit to being as bad as coolness demands. Directed by Michael Mayer, who has been more than competent at the helm of Broadway rock musicals like American Idiot and Hedwig and the Angry Inch, Head Over Heels lacks the courage of its contradictions. It mutters deferentially when what you want is a rebel yell." Ben Brantley for New York Times

"Broadway traditionalists may not approve, but that feels like part of the point. Head Over Heels is a fantasy and celebration of nonconformity, and it puts its casting where its mouth is with an ensemble that is diverse in race, gender and size. Honoring the beat, in this merry Arcadia, means making room for different drummers." Adam Feldman for Time Out New York

"Back to the source, Sir Philip called his prose romance, a trifle. Indeed that's just what Head Over Heels is. And if that's your speed, you may just flip for it." Roma Torre for NY1

"If you have trouble imagining songs like "Vacation" and "Cool Jerk" fitting into a scenario depicting a royal family's romantic complications, you still will after seeing this relentlessly frothy musical, for which the term "check your brain at the door" could have been invented. The farcical, gender-fluid shenanigans are as campy as things get on Broadway. And that's saying something." Frank Scheck for Hollywood Reporter

"From the sets and costumes to the performance style, the basic principle seems to be: Less is boring and more is never enough. Thanks, no doubt, to the Oracle of Delphi (played here by the impishly funny Peppermint), it’s a miracle that at least some of the wit in Jeff Whitty’s original book gets through." Marilyn Stasio for Variety