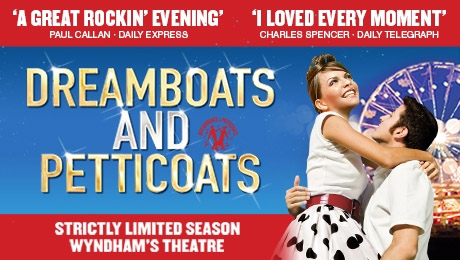 Type de série: Reprise
Théâtre: Wyndham s Theatre (Londres - Angleterre) Durée : 3 mois Nombre : Première Preview : mardi 16 octobre 2012Première : mardi 16 octobre 2012Dernière : samedi 19 janvier 2013Mise en scène : Bob Tomson • Chorégraphie : Carole Todd • Commentaires : This show was inspired by the unexpectedly huge sales of a CD issued by Universal Music, aimed at the nostalgia market. The first “Dreamboats and Petticoats” CD sold over two million copies and led to the creation of a stage show which began a five month UK tour in Bromley in February 2009. The success of the tour led to its West End debut, as a seven-week filler. After a three month gap, the show was re-created at the Playhouse Theatre in January 2010 and is still running at the start of 2012. At the same time a second UK tour played throughout 2010, much of 2011 and is planned to run through 2012.Presse : LYN GARDNER for THE GUARDIAN says, " Inoffensive and as squeaky clean as a toothpaste advert, this musical trip down memory lane was inspired by a compilation album of early 1960s hits...Dreamboats and Petticoats is not bad, although it tails off lamely in the second half, but it is not very good either."
FIONA MOUNTFORD for THE EVENING STANDARD says, "peppy production ."
CHARLES SPENCER for THE DAILY TELEGRAPH says, "I confess I loved every moment of this show, hackneyed though the script by TV sitcom writers Laurence Marks and Maurice Gran often is. Bob Tomson’s lively production has great heart, following a group of teenagers at a youth club as they bicker, feud, fall in and out of love and try – and fail – to become pop stars."
VALERIE POTTER for THE LONDON LITE says, "Boasts toe-tapping tunes aplenty, yet ultimately buckles under their weight."
SAM MARLOWE for THE TIMES says, "Although Bob Tomson’s direction is mercifully brisk and the company is well-drilled, there’s a laziness to the concept and a cheapness to its execution that no amount of energetic gyration and forced, cheesy cheeriness can disguise."