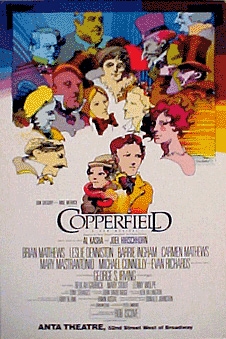 Type de série: Original
Théâtre: August Wilson Theatre (Broadway - Etats-Unis)
Durée : 1 semaine Nombre : 26 previews - 13 représentationsPremière Preview : mercredi 25 mars 1981Première : lundi 13 avril 1981Dernière : dimanche 26 avril 1981Mise en scène : Robert Iscove • Chorégraphie : Robert Iscove • Avec : David Ray Bartee, Ralph Braun, Katharine Buffaloe, Maris Clement, Michael Connolly, Michael Danek, Daniel Dee, Leslie Denniston, Spence Ford, Beulah Garrick, Heather Lea Gerdes, Michael Gorman, David Horwitz, Barrie Ingham, George S. Irving, Mary Mastrantonio, Carmen Mathews, Brian Matthews, Pamela McLernon, Darleigh Miller, Dana Moore, Gary Munch, Keith Perry, Linda Poser, Richard Warren Pugh, Brian Quinn, Evan Richards, Lynne Savage, Bruce Sherman, Christian Slater, Mary Stout, Claude Tessier, Missy Whitchurch, Lenny WolpePresse : In his review in the New York Times, Frank Rich said, "This is the kind of musical that sends you out of the theater humming every score other than the one you've just heard . . . of course, derivativeness is nothing new in Broadway musicals that aspire to be pure commercial entertainments. The real problem with Copperfield is that its authors are not good mimics. From the music to the scenery to the cast, everything about this show looks tacky in comparison to its prototypes. And when the writers actually attempt to come up with fresh ideas - well, look out! The show's book manages to miss the human comedy, the tears and even the point of Dickens's novel. This is no longer the story of a boy's hard-won growth to emotional manhood, but a clunky, often incoherently told melodrama in which all the villains literally wear black . . . the title character seems an almost peripheral figure in the proceedings. He's played by two decent singers - one boy, one man - who are nothing if not chips off the same block. The block is made of wood . . . Some of the music is mildly tuneful, after its many fashions, but the lyrics are, at best, unintentionally funny . . . Rob Iscove's choreography departs from the show's norm, in that it seems to have been culled from flops rather than hits . . . it could be argued that Copperfield might be entertaining for young children, whose innocent minds aren't sullied by memories of the superior shows that this one dimly recalls. But it's hard to imagine what parent - short of an evil Dickensian one - would take the family to the ANTA when Annie, Barnum and The Pirates of Penzance are in town." New York Times, Frank Rich