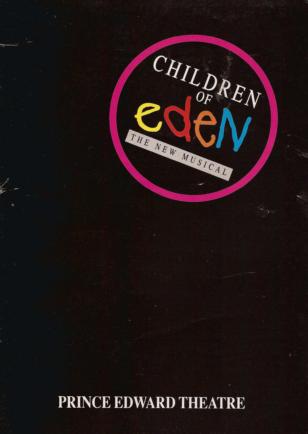 Type de série: Original
Théâtre: Prince Edward Theatre (Londres - Angleterre)
Durée : 2 mois 3 semaines Nombre : Première Preview : InconnuPremière : mardi 08 janvier 1991Dernière : samedi 06 avril 1991Mise en scène : John Caird • Chorégraphie : Matthew Bourne • Avec : Ken Page {God), Martin Smith (Adam), Shezwae Powell (Eve), Richard Lloyd-King (Snake), Adrian Beaumont {Cain), Kevin Colson {Noah), Ruthie Henshall, Frances RuffelleCommentaires : 'The opening of Children of Eden in the West End of London coincided with the start of war with Iraq and one of the worst slumps in audience attendence in recent years; as a result this spectacular musical was unable to find its audience.
Mais ce n'est pas le seul problème…
A “new biblical musical” told the story of the Old Testament from the Creation until just after the Flood. In a kind of throwback to the earlier success of Stephen Schwartz’s “Godspell”, the characters appeared in cute costumes, some of them appearing as cute, furry little animals. God and Eve were portrayed as jolly black performers, and Cain’s slaying of Abel was performed “in the humdrum context of a family spat”. The scenery was domed scaffolding, with disco and laser effects, and according to one critic: “The Garden of Eden was decorated in tatty hanging drapes and was like unto the current state of Liberty’s in its carpet and fabric sales department”. With very mixed critical reaction, the general cry was “Where is the nearest Exodus”? The show lost all its investment and closed after ten weeks.Presse : Daily Telegraph: 'Neither a triumphant success or ghastly failure' - '...fervently uplifting ballads' - '...animals presented most imaginatively thanks largely to Richard Sharples's witty costumes and Matthew Bourne's inventive choreography. The giraffes are especially enchanting' - 'Adrian Beaumont is excellent as Cain, Earlene Bentley stops the show after the flood has subsided with 'Ain't it Good'' - 'Children of Eden is mildly and fitfully entertaining'

Guardian: '...an amiable well directed piece of biblical storytelling but one that lacks a big idea' - 'Several of his 21 songs fall pleasantly on the ear. What his score lacks is a consistency of idiom; thus we get a 30's tea dance number from the snake, a forties close harmony routine from Noah's offspring, a sixties disco swinger from Ham and Company and a periodless hot gospel number from Mama Noah' - 'Best features of the evening are, in fact, John Caird's production and John Napier's design concept'

Daily Express
'Schwartz's music was pleasant but unmemorable, though the voices were heavenly and he might have a psychedelic hit with 'Generations' - 'It has energy, superb choreography and some spectacular moments, especially when the chorus dressed up as animals' -

The Times
'Napier has indeed designed a staggering transformation, in which the stage as we know it has disappeared altogether, replaced by a huge arched space with 2 long galleries all around the stage floor' - 'There is no doubt that it is a remarkable spectacle' - 'Although it may be called to question artistically and spritually, it has all the hallmarks of a major popular success. Dreary it most certainly is not'

Herald Tribune
'There are one or two good numbers and some equally strong performances from Kevin Colson as Noah, Ken Page as a huge black God and Frances Ruffelle as the girl thrown of the ark for having the wrong parentage' - 'Not so much a plot show as a ecumenical revivalist pageant, it has a splendid set by John napier and several ingenious animal acts'

Plays and Players:
'The plot is a glutinous mixture of coyness and over simplification that makes the insulting platitudes of Miss Saigon look profound' - '...the cast don a variety of magnificent skeletal animal costumes, the beasts are truly amazing creations' - '...spectacular upbeat 'Generations' sung marvellously by Ray Shell's Ham'

Timeout:
'Schwartz's musical score though laced with attractive if derivative gospel 'Godspell' and swing numbers is let down by hugly variable lyrics' - 'Richard Sharples's ingenious animal costumes and John Napier's two tiered set are inspired' - 'I expect it will run for much the same reasons as Starlight Express' (Not a compliment then !!)

Independent on Sunday:
'As a drama its a shambles, musically a ragbag, there's no sex, no wit. It has a huge all singing, all dancing cast and some nice leading actors - Kevin Colson and Frances Ruffelle - and some visual tricks' -

Daily Mail
'However, there is spectacle in plenty and talent too with this multi racial cast' - 'A touching and effective Yonah from Frances Ruffelle who managed to flesh out the rough and ready routine love interest on the ark with sincerity -

Observer
'...and we heard and saw that Shezwae was beautiful and the best thing in the show..... And the name of Japheth was Anthony Barclay and he was the second best thing' - What's On '...I approached Children of Eden with some trepidation but, wonder of wonders I do believe I enjoyed Stephen Schwartz's latest entry into the musical stakes' - 'With Children of Eden I have to admit he has done a thoroughly professional job of adapting the first book of the Bible, apart from a few quibbles, has produced a successful musical' - 'Where there is a lightness of touch the show scores brillantly. It is not afraid to have a sense of humour and even in the sombre second half there's a joyous opening chorus entitled 'Generations' - 'The way the team created the animals for the ark scene is brillantly imaginable and totally believable. It is stunningly well staged and it is a element of surprise that is always there that makes it an attraction' - 'Whatever secret the show has for its success I have to admit it is certainly in every way better than either Cats or Les Miserables and as they are going to run for ever, Children of Eden could well be in the same league as these perennial hits'