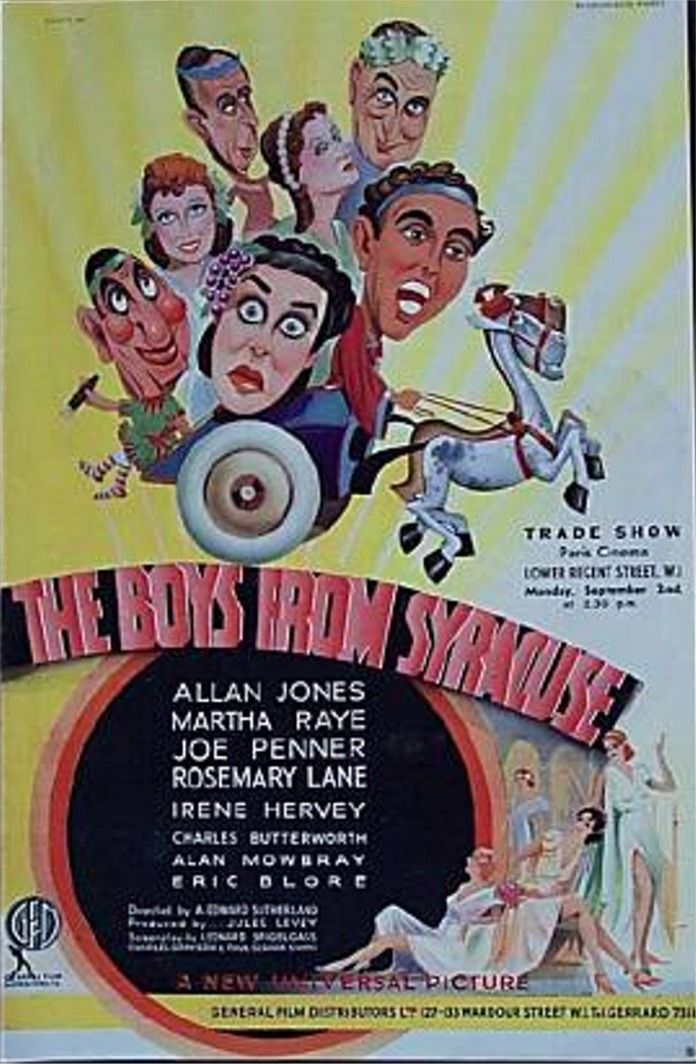 Type de série: Film
Théâtre: *** Film (*** - ***) Durée : Nombre : Première Preview : vendredi 09 août 1940Première : vendredi 09 août 1940Dernière : vendredi 09 août 1940Mise en scène : A. Edward Sutherland • Chorégraphie : Presse : "Considering that it was adapted from a Broadway musical by Richard Rodgers, Lorenz Hart and George Abbott, The Boys From Syracuse must rank as a disappointment, though it manages to remain entertaining throughout its surprisingly brief 74-minute running time. Like its theatrical predecessor, the film was inspired by Shakespeare's The Comedy Of Errors ("After a play by William Shakespeare long, long after" reads the opening title). In ancient Ephesus, young tyrant Antipholus (Allan Jones) sentences elderly merchant Aegeon (Samuel S. Hinds) to death unless the latter can come up with a handsome ransom. What Antipholus doesn't know is that Aegeon is his own father; he also doesn't know that he has a twin brother, also named Antipholus (and also played by Allan Jones) who has just arrived from Syracuse in search of dear old daddy. Further complicating matters is that Antipholus of Ephesus and Antipholus of Syracuse both have slaves named Dromio (Joe Penner)-likewise identical twins! The mistaken-identity angle is played to the hilt, with A. of E.'s wife Adriana (Irene Hervey), A. of S.'s girlfirend Phyllis (Rosemary Lane), and Dromio of Ephesus' main squeeze Luce (Martha Raye) ending up just as confused as everyone else. Only four of the original Rodgers & Hart songs were retained-"This Can't Be Love", "Falling In Love With Love", "Sing For Your Supper", and "Oh, Diogenes"-while two new ones were written for the film. Most of the best jokes are based on anachronisms, with Dromio the slave organizing a labor union (complete with placards), a cheering section at an execution shouting "Give him the ax", and a parchment newspaper bearing such headlines as "Ephesus Blitzkriegs Syracuse". Originally purchased by Universal as a vehicle for the Ritz Brothers, The Boys from Syracuse isn't any great shakes, but it would certainly be well worth seeing again (last telecast in the 1970s, it seems to have fallen off the face of the earth in recent years!)" Hal Erickson
"Richard Rodgers and Lorenz Hart's superbly melodic score for their hit The Boys From Syracuse, first presented on Broadway in 1938, received short shrift from producer Jules Levey, whose filmed version of this quintessential tale of mistaken identity (based on Shakespeare' s The Comedy of Errors ) fell just this side of disaster. Numbers like "Sing For Your Supper," "Falling In Love With Love," "He And She" and "This Can't Be Love" - classics every one of them were only included by default, or in truncated versions that failed to do them justice, while new ones (such as "Who Are You?" and "The Greeks Have No Word For It") were added. Leonard Spigelgass and Charles Grayson's screenplay (based on the George Abbott stage version) traded in anachronisms at the expense of the satire originally intended, with cigar smoking Greeks and checkered chariot-cabs typical of the humour on offer." Clive Hirschhorn - The Hollywood Musical
"Hollywood, or at least Universal, should be hanged for what it did to the celebrated Broadway show by George Abbott and Rodgers and Hart (based on The Comedy of Errors). The rewriting was so disastrous that the studio finally cut the picture down to 74 minutes, which doesn't leave much time for Martha Raye and Charles Butterworth or for the wonderful songs—"Falling in Love with Love," "Sing for Your Supper" and "This Can't Be Love." The cast includes Allan Jones, Joe Penner, Rosemary Lane, Irene Hervey, and Alan Mowbray. Directed by Eddie Sutherland; the dance director was Dave Gould. " Pauline Kael