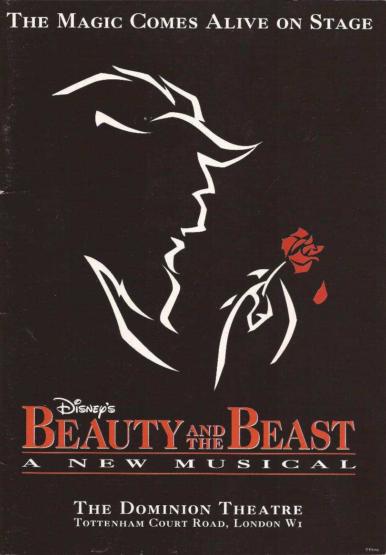 Type de série: Revival
Théâtre: Dominion Theatre (Londres - Angleterre) Durée : 2 ans 7 mois Nombre : 1071 représentationsPremière Preview : mardi 29 avril 1997Première : mardi 13 mai 1997Dernière : samedi 11 décembre 1999Mise en scène : Robbie Roth • Chorégraphie : Matt West • Avec : Cast: Alasdair Harvey (Beast), Julie Alanah Brighten (Belle), Burke Moses (Gaston), Richard Gauntlett (Lefou), Norman Rossington (Maurice), Barry James (Clogsworth), Derek Griffiths (Lumiere), Rebecca Thornhill (Babette), Mary Millar (Mrs Potts), Di Botcher (Mme de la grande Bouche)Commentaires : Notes: Based on the 1991 Disney film, seven new songs were written for the stage musical with lyrics by Tim Rice. Howard Ashman, the original lyricist, had died in 1991. The Broadway production ran for 5,461 performances between 1994 and 2007. The show had been staged in eight other cities before coming to London and was said to have cost £10 million, the most expensive musical ever staged in the West End. It was lavish, spectacular and filled with magical effects and a superb re-creation of the famous “Be Our Guest” sequence from the film - a sequence which never failed to stop the show. From the opening, when a witch soared high in the air, to the finale, where the Beast was magically transformed back into a handsome Prince, this was a show that delighted even the most cynical of the critics. During the London run replacements for Belle included Michelle Gayle and Annalene Beechey, and John Barrowman and Earl Carpenter as the Beast. The production won the Olivier Award for Best New Musical in 1998. The world-wide box office takings for this show went on to exceed $1.4 billion, and the production has since been seen in 13 countries and 115 cities.Presse : MICHAEL BILLINGTON of THE GUARDIAN said "It may not be high art but it's certainly great fun."

MICHAEL COVENEY of DAILY MAIL said "If you have kids, prepare to take them now."