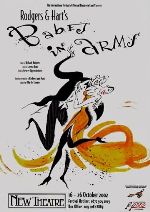 Type de série: Revival
Théâtre: New Theatre (Cardiff - Angleterre) Durée : 1 semaine Nombre : Première Preview : mercredi 16 octobre 2002Première : mercredi 16 octobre 2002Dernière : samedi 26 octobre 2002Mise en scène : Martin Connor • Chorégraphie : Bill Deamer • Presse : The Times - Saturday 19th October 2002:
SEVERAL of the tastier offerings in Cardiff’s International Festival of Music Theatre are "concert performances", which must mean that folk in evening dress will be singing Sondheim’s Anyone Can Whistle, Porter's Jubilee and (too expensive and American a show to get the British premiere it merits) McNally and Flaherty's Ragtime. But Rodgers and Hart's Babes in Arms is receiving the full treatment.
That's to say, the decor is up to British touring if not Broadway standards, and the cast, though a bit raw, is young, spirited and hugely likeable.
Though the musical dates from the late 1930s, it represents the end of an era, not the start of a new one. And that's ironic, for the plot is supposedly about the theatre's future. The "babes in arms" are the youthful flotsam and jetsam working in a playhouse in Cape Cod, hoping to produce a show introducing New York to a brave new generation.
And how to achieve this? Their triumphant closing number, packed with girls in gold swimsuits, demonstrates how. By wowing the Great White Way with exactly the sort of jaunty show that had been wowing it for two decades. You might almost say that Babes in Arms marks the death-throes of the kind of musical the war and Oklahoma! Would sweep away.
But who cares? If you enjoy escapist 1920s and 1930s musicals, you'll enjoy this. The plot is sappy, key events are ill-motivated, but it's fun, fun, fun. It's fun to meet Rose Owen, the ex-child star who comes from Hollywood to launch a stage career in a doleful saga called The Deep North. It's fun to see this play's pretentious Southern author made to look a fool by the "babes in arms" when he dons a Davy Crockett hat and spouts lines about “facing the perils of the wind and snow". It's fun when, in a preposterously curt denouement, everything thespian and romantic turns out well.
The songs include Babes in Arms itself, Johnny One Note, My Funny Valentine, The Lady is a Tramp, which in its proper context is what it should be, a ode to freedom and wanderlust. With the delightful Alexandra Jay singing that, and Alicia Davies, Joshua Dallas, Simon Coulthard and Tiffany Graves also making quite an impression, I don't see why Martin Connor's production shouldn't go far.