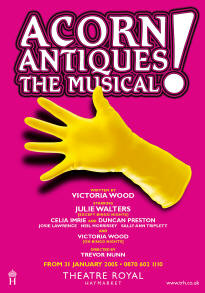 Type de série: Original
Théâtre: Haymarket Theatre (Londres - Angleterre) Durée : 3 mois 1 semaine Nombre : Première Preview : jeudi 27 janvier 2005Première : jeudi 10 février 2005Dernière : samedi 21 mai 2005Mise en scène : Trevor Nunn • Chorégraphie : Stephen Mear • Avec : Victoria Wood (Monday evenings and Wednesday matinees only), Julie Walters (Mrs Overall) (Tuesday to Saturday evenings and Saturday matinees only), Celia Imrie (Miss Babs), Duncan Preston (Mr Clifford), Neil Morrisey (John), Josie Lawrence & Sally Ann Triplett (Mrs Berta)Commentaires : A ten minute sketch inside a 30 minute TV comedy series had been expanded into a three hour musical. As a result, the first half and second halves were virtually two different shows. The whole thing was a muddle, but with its hugely talented cast, and its satire ranging from “Crossroads” to “Les Mis” and Starbucks to Sondheim, and with Victoria Wood and Julie Walters alternating in the lead role, it attracted an audience of fanatical supporters who roared with delight at every familiar gag and malfunctioning prop. In 2006 the show was completely re-written for a major UK tour, so that the entire show was now the “straight” musical performance of “Acorn Antiques”. Mrs Overall was played by Ria Jones and the tour received excellent notices and was felt to be much better for the changes. It is this revised version which is now regarded as the “real” show.Presse : NICHOLAS DE JONGH for THE EVENING STANDARD says, "A musical farce and a farsical musical...No Memorable numbers "
MICHAEL BILLINGTON for THE GUARDIAN says, "A load of slack, self-indulgent rubbish."
PAUL TAYLOR for THE INDEPENDENT says, "I haven't laughed as helplessly since the day I heard Bernadette had closed at the Dominion. It's the supreme cheek of the endeavour that will irritate some people and exhilarate the rest of us."
BENEDICT NIGHTINGALE for THE TIMES says, "Mischievous, good-natured, charming. But a comic masterpiece? Not really."