Résumé: 'Tis 1605 and England's greatest playwright is in trouble. Will Shakespeare has produced just two plays; Measure for Measure, which according to King James was incomprehensible bollingbrokes by any measure, and All's Well That Ends Well which didn't even end well. Will desperately needs to maketh a brilliant new play to bolster his reputation and avoid being cast aside by King and country. But Will's personal life is encountering more dramatic twists and turns than any theatrical story he can conjure. How the futtock can a Bard be expected to find a plot for a play whilst his daughters run amok and his house is used as refuge for any old waif and stray. As time runs out, can Will hold on to his dream of being recognised now and for all time, as indisputably the greatest writer that ever lived, or will family woes thwart Will's chances of producing his masterwork? 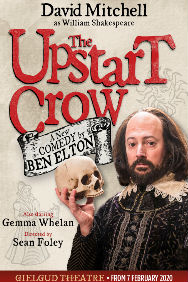 Type de série: Original
Théâtre: Gielgud Theatre (Londres - Angleterre) Durée : 2 mois Nombre : Première Preview : vendredi 07 février 2020Première : mardi 18 février 2020Dernière : samedi 25 avril 2020Mise en scène : Sean Foley • Chorégraphie : Avec : David Mitchell (Shakespeare), Gemma Whelan, Helen Monks (Susanna), Rob Rouse (Bottom), Steve Speirs (Burbage), Mark Heap (Dr John Hall), Danielle Phillips, Jason Calldender, Rachel Summers.Commentaires : David Mitchell stars as the Bard himself in a brand new stage adaptation of his hilarious historical TV sitcom Upstart Crow, set to open at the Gielgud Theatre in February 2020.
Written by Ben Elton, known for penning TV series such as The Young Ones and Blackadder as well as musicals We Will Rock You and Love Never Dies, the series first aired in 2016 as part of the commemorations for 400 years since William Shakespeare’s death. The show follows the writing and preparations of the premiere of Romeo and Juliet in 1592, with each episode alluding in some way to a Shakespeare play.
Mitchell will reprise his role in the show on stage as he plays Shakespeare alongside Gemma Whelan, who also reprises her role from the series as Kate, the daughter of Shakespeare’s landlord who wants to become an actor.
The stage adaptation of the TV show will be set in 1605, a point in time where Shakespeare had only written All’s Well That Ends Well and Measure for Measure, leaving Britain’s greatest playwright in need of a hit. But as he battles his personal life to put pen to paper, can he fulfil his potential?