Résumé: In John Logan's new play, enchantment and reality collide as this brief encounter lays bare the lives of these two extraordinary characters.When Alice Liddell Hargreaves met Peter Llewelyn Davies at the opening of a Lewis Carroll exhibition in 1932, the original Alice in Wonderland came face to face with the original Peter Pan 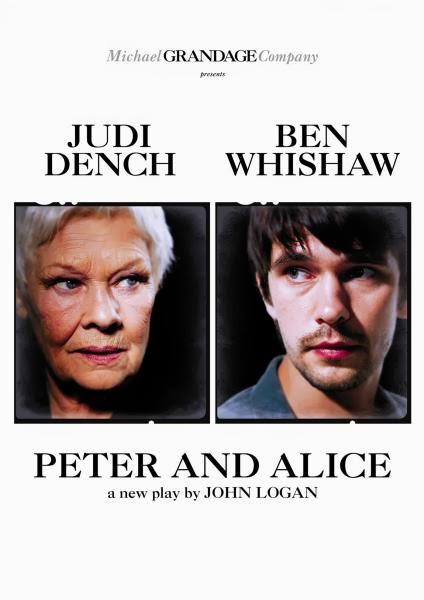 "Laboured and over-written...The evening strikes me as that true rarity: a Grandage dud."
Paul Taylor for The Independent

"In all honesty I got more out of the performance and Michael Grandage's production than I did out of John Logan's 90-minute play, which is an elegant literary conceit offering surprisingly few revelations.."
Michael Billington for The Guardian

"The play, while admirably high-minded and interesting, is inevitably a bit doom-laden. How can a story which looks back so much, not least on the losses of the First World War, be anything but sorrowful?
Quentin Letts for The Daily Mail

"It feels too wordy – the characters often tell rather than do – while trying to relate so much that happened in the pair's lives to their fictional characters sometimes feels forced.."
Julie Carpenter for Daily Express

"The production is attractive but at times laboured, and the writing is occasionally overblown...Peter and Alice is short – less than an hour and a half, without an interval – yet feels flabby. It’s not Grandage at his best, even if for fans of the stars it may still be a treat."
Henry Hitchings for Evening Standard