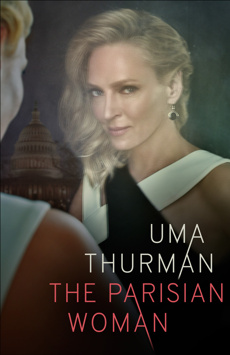 Ms. Thurman leads a starry cast which includes Josh Lucas, Tony Award winner Blair Brown, Marton Csokas, and Tony Award nominee Phillipa Soo, who are all guided by the capable directorial hands of Tony Award nominee Pam MacKinnon. Judging from the astronomical success of "House of Cards", Mr. Willimon knows exactly how to create dramatic tension in the political arena. Undoubtedly, The Parisian Woman is following suit and causing quite the stir on the Great White Way!

Set in Washington D.C., the play is littered with fresh references to the current President of the United States and weaves a twisting tale of backstage politics, leverage, and blackmail. These plot twists are as unbelievable as they are likely to occur in today's regime, when a man who is caught boasting about sexual exploitation still ends up running the country. The Parisian Woman is also a very modern exploration of relationships, placing the non-traditional under the spotlight. Chloe (Ms. Thurman) and Tom (Mr. Lucas) enjoy an open relationship which proves advantageous when external love interests wield power and influence in the political circuit. Ultimately, we discover that Chloe's love for her husband allows her to stop at nothing to see him climb the ladder.

Mr. Willimon's script is well-written and structured, even to the point where a midway through drop in pace disarms the audience and leaves us unprepared for the startling revelation of the next scene that hits us out of nowhere. And the production is certainly well-cast with Ms. Thurman's multifaceted and mysterious allure perfectly matching the enticing Chloe. In addition, Josh Lucas provides an earnest likeability as Tom, Marton Csokas provides the comic relief in the moments of Peter's desperation, Blair Brown is wonderfully sovereign as Republican Jeanette Simpson, whilst Phillipa Soo masters the difficult arc of her daughter Rebecca with confidence and vulnerability.