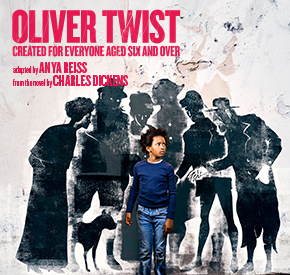 Radio Times “An exhilarating take on Charles Dickens' classic. The transformations of the actors from character to character were part of the spectacle and compelling to watch; An ENERGETIC, CREATIVE, CLEVER interpretation”

The Guardian “FULL OF INVENTION. Director Caroline Byrne is not afraid of frightening her young audience. Michael Hodgson’s Fagin looks like a pawnbroker down on his luck, dressed in a shiny jacket and scruffy suit. Daniel Hoffman-Gill is thunderingly imposing as workhouse boss Bumble and chief baddy Bill Sikes.” “It is playful, fierce and pleasingly unpatronising”

Sardines “Anya Reiss has met the challenge head on with this adaptation which manages to be both original and faithful to the novel – and that’s quite a balance to have achieved. The children around me seemed to be lapping it up and finding plenty to enjoy”. “Open Air Theatre Regents Park has made a speciality of adapting classics, mostly Shakespeare, for family audiences in recent years and this latest one is worth catching if you can”

BroadwayWorld.com “Gbemisola Ikumelo is excellent and has great fun with the ebullient character of Mrs Corney, who she plays with a very exaggerated West African accent to great comedic effect. She eases into Nancy's big-hearted cockney charm”

UpStagedArts.com “This production manages to show the darker side to Dickens' novel while at the same time being engaging and entertaining, I would definitely recommend going to see it over the summer!”