Résumé: A wealthy first-time Broadway producer, Julia Budder, is throwing an opening night party for The Golden Egg at her luxurious Manhattan home. The playwright Peter Austin, the director, the actors, along with assorted friends and hangers-on (including a critic) nervously wait for the late-night reviews printed in the newspapers. Meanwhile, they gossip and throw out the names of the celebrities who are in attendance. Virginia Noyes, the star of the show, is taking drugs. James Wicker, an old friend of the playwright, is now a successful TV actor who turned down the lead in the play, and is relieved and secretly thrilled about the bad reviews that arrive. And, although Ira Drew is a theater critic, he is very critical of the theater because he has no talent to actually participate, despite his secretly writing plays. Not discouraged by the bad reviews for The Golden Egg, the assembled parties eagerly make plans for their next play, which they know will be a hit. 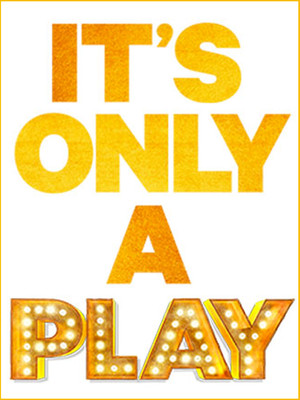 The play was originally called "Broadway, Broadway" and had closed during tryouts in Philadelphia in 1978. Geraldine Page and James Coco were in the Philadelphia cast, and the play was set to open on Broadway at the Eugene O'Neill Theatre. However, the Philadelphia reviews were negative and the Broadway opening was cancelled.
In 1984, McNally said that after "Broadway, Broadway" closed he was no longer confident, but finally realized that having a show close is not the worst thing that could happen. For the Broadway run the play was rewritten to bring the story and references up to 2014. The role of Emma was cut and replaced by Gus, an aspiring actor employed as the party's butler.Presse : "All the cast members fulfill their raisons d’être, which is to sling a whole lot of mud in the nicest possible way. As for Mr. McNally’s play itself...it mostly has the depth of a shot glass (and I mean that in the nicest possible way). It is to Broadway what Neil LaBute’s 'The Money Shot,'...is to Hollywood - an R-rated sitcom satire with some very funny jokes." Ben Brantley for New York Times

"Besides good old dependable Nathan Lane, this diversion has good timing going for it. People are desperate for laughs and comedies on Broadway are bloody rare. If only McNally’s 'Play' was more well-done." Joe Dziemianowicz for New York Daily News

"Mullally and Lane alone are almost worth the price of admission, with a sense of timing that’s a thing of wonder. As for the rest? It’s barely a play." Elisabeth Vincentelli for New York Post

"Jack O’Brien’s shiny, bouncy production looks great and hey it’s McNally: there are good bitchy one-liners here and there. But too few. Only a play? It’s barely a play." David Cote for Time Out New York/NY1

"It seemed to be a dream cast: Nathan Lane, Matthew Broderick, Stockard Channing, Megan Mullally, F. Murray Abraham. But, like children, stars don't always play well together. The result is that Terrence McNally's comedy 'It's Only a Play' is only amusing rather than drop-dead funny." Robert Feldberg for The Record

"Theatergoers who pay top dollar – and higher – to see the show will not be disappointed by its classy looks and energetic playing, even though 'It’s Only A Play' winds down long before it is over." Michael Sommers for New Jersey Newsroom

"It's in Lane's dynamite early scenes with gifted newcomer Micah Stock that this funny if flimsy comedy really fires on all cylinders, while Broderick underwhelms in a key role." David Rooney for The Hollywood Reporter

"Laugh if you must — and you really must laugh at McNally’s unquenchable wit — but those sloppy-kiss tributes to the theater delivered by Peter and James are deeply felt and honestly moving. And if you don’t share the gooey sentiments, you really shouldn’t be at this show." Marilyn Stasio for Variety