Résumé: Indecent is inspired by the true events surrounding the controversial 1923 Broadway debut of Sholem Asch’s God Of Vengeance - a play seen by some as a seminal work of Jewish culture, and by others as an act of traitorous libel. Indecent charts the history of an incendiary drama and the path of the artists who risked their careers and lives to perform it. 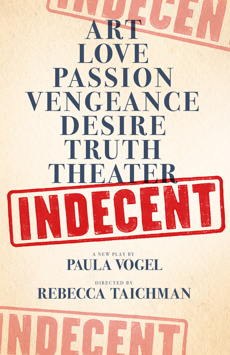 Type de série: Original
Théâtre: Cort Theatre (Broadway - Etats-Unis) Durée : 3 mois 2 semaines Nombre : Première Preview : mardi 04 avril 2017Première : mardi 18 avril 2017Dernière : dimanche 06 août 2017Mise en scène : Rebecca Taichman • Chorégraphie : Avec : Katrina Lenk, Mimi Lieber, Max Gordon Moore, Tom Nelis, Steven Rattazzi, Richard Topol, Adina VersonCommentaires : It had critics in raptures during its Off-Broadway run, and now Indecent transfers to the main stem with a 2017 Tony nomination for Best Play. Written by Pulitzer Prize winner Paula Vogel (How I Learned to Drive), this startling play is the behind the scenes story of one of the 20th century's most contentious works, Sholem Asch's God of Vengeance. Centered on a Jewish couple who run a brothel, and featuring a lesbian love story, Asch's work caused a storm of controversy on its New York debut, and was eventually shuttered and the cast put on trial for obscenity. Indecent traces the lives of those creative minds involved in the work with wit and warmth.Presse : "No whiff of scandal or self-censorship attends Rebecca Taichman’s production of Ms. Vogel’s thoughtful evocation of the life and times of “God of Vengeance,”... “Indecent” arrives on Broadway as one of the season’s most respectable — and respectful — plays... “Indecent” is, above all, decent, in the most complete sense of the word. It is virtuous, sturdily assembled, informative and brimming with good faith." Ben Brantley for New York Times

"There was a time when a smooch shared by two women on stage could be deemed smutty enough to shutter the production. Yes, that happened. “Indecent,” the heart-stirring and haunting play created in tandem by author Paula Vogel and director Rebecca Taichman offers a dramatic reminder of that — and of the power of art." Joe Dziemianowicz for New York Daily News

"An elegant tribute to things that vanish in the blink of a historical eye, Indecent is a memorial that feels like a blessing." Adam Feldman for Time Out New York

"“Indecent” is also the name Paula Vogel has given the riveting backstage drama she’s written (with director Rebecca Taichman) about the intertwined lives of an acting company and the roles they played in this scandalous production." Marilyn Stasio for Variety