Résumé: Benjamin Britten, sailing uncomfortably close to the wind with his new opera, Death in Venice, seeks advice from his former collaborator and friend, W. H. Auden. During this imagined meeting, their first in twenty-five years, they are observed and interrupted by, among others, their future biographer and a young man from the local bus station.

Alan Bennett's new play is as much about the theater as it is about poetry or music. It looks at the unsettling desires of two difficult men, and at the ethics of biography. It reflects on growing old, on creativity and inspiration, and on persisting when all passion's spent: ultimately, on the habit of art. 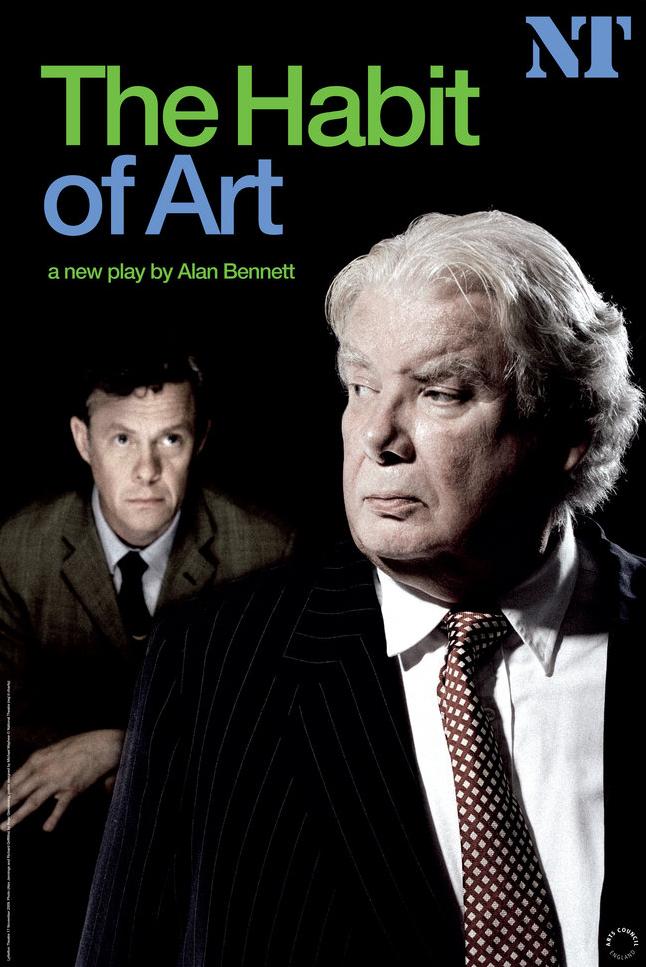 Type de série: Original
Théâtre: National Theatre (Londres - Angleterre) Salle : Lyttelton TheatreDurée : 6 mois Nombre : Première Preview : jeudi 05 novembre 2009Première : mardi 17 novembre 2009Dernière : mercredi 19 mai 2010Mise en scène : Nicholas Hytner • Chorégraphie : Avec : Richard Griffiths (W H Auden), Alex Jennings (Benjamin Britten), Frances de la Tour, Danny Burns, Martin Chamberlain, Philip Childs, John Heffernan, Barbara Kirby, Elliot Levey, Adrian Scarborough, Stephen Wight, Tom Attwood, Laurence Belcher, Otto Farrant, Toby Graham.Commentaires : The Habit of Art is a 2009 play by English playwright Alan Bennett, which centers on a fictional meeting between W. H. Auden and Benjamin Britten while Britten is composing the opera “Death in Venice”. The play has been described as a multi-layered postmodern masterpiece, describing the meeting between poet W.H. Auden (Richard Griffiths) and composer Benjamin Britten (Alex Jennings) in 1972, some 30 years after the failure of the opera they wrote together. But the play is not just about this meeting… it is a rehearsal of the play, so includes the stage manager (Frances de la Tour) who steps in occasionally to read the part for an absent actor, the writer, who must field complaints about his play, and even a casual walk on from another play being performed elsewhere in the theatre complex.Presse : "Nicholas Hytner directs with an unerring instinct for the volatile nature of the material in a cracking production that flirtatiously keeps the audience up to speed with the outrageous amount of information and allusion." Paul Taylor for The Independent

"Absolute cracker, often wonderfully and sometimes filthily funny (this is not a show for the prudish), but also deeply and unexpectedly moving." Charles Spencer for The Daily Telegraph

"Satirical, serious and self-indulgent, sometimes all at the same time." Quentin Letts for The Daily Mail

"The play has the characteristic Bennett mix of wit and wistfulness...A play that could easily seem tricksy is also given a superbly fluid production by Nicholas Hytner and is beautifully acted." Michael Billington for The Guardian

"So much of The Habit of Art is so engaging, it seems churlish to point out its basic problem: which is that even the excellence of Richard Griffiths and Alex Jennings can’t stop one feeling that Bennett doesn’t fully trust his material. He isn’t confident that his portraiture can sustain a full-length play...the play lacks dramatic tension." Benedict Nightingale for The Times

"It’s funny, and sometimes brilliantly so, but strangely uninvolving. Although Bennett savours his material, he doesn’t make it sing." Henry Hitchings' for The Evening Standard