Résumé: Deuce tells the story of the reunion of two retired women tennis players who once made up a championship doubles team. When they meet again at the U.S. Open, the women - now at the end of their lives - find themselves trying to make sense of the professional partnership that brought them to the top of the sports world in their youth.
In the winter of their lives, two former tennis players try to make sense of the partnership that took them to the top of their game. 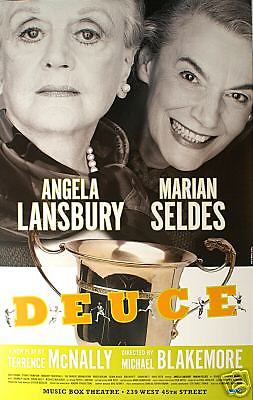 JOE DZIEMIANOWICZ of NEW YORK DAILY NEWS: "Both Tony-winning actresses sparkle with the rarest of star power. But even that can't make Terrence McNally's pleasant but wafer-thin story anything more than it is - a coupla golden girls sitting around talking."

CLIVE BARNES of THE NEW YORK POST: " 'Deuce' should have been a grand slam at the Music Box Theatre last night. Instead it was a double-fault. And the double-fault was certainly not made by the actresses, for even the brilliant stereo sound effect of unseen bouncing tennis balls was far more impressive than the play itself, which our misguided heroines exuberantly bounced across."

JACQUES LE SOURD of the JOURNAL NEWS: "They (Lansbury and Seldes) are at the service of a play that is really a chamber exercise meant for a smaller theater, and a lesser cast. But then no one would care enough to sit through it."

MICHAEL SOMMERS of STAR-LEDGER: "McNally's slight piece about a pair of former tennis champs is scarcely any great shakes as drama, but it's pleasant enough. Viewers should expect an amiable 90 minutes with Lansbury and Seldes, each one charming in her own distinctive way."

ELYSA GARDNER of USA TODAY "Imagine a ring made of two precious gems set in pewter, and you'll have a sense of the immensely frustrating experience provided by Terrence McNally's 'Deuce' "

LINDA WINER of NEWSDAY: "There are definite pleasures in watching these beloved actresses trying to persuade us - and themselves? - to be fascinated and touched by the reunion of two aging tennis champions being honored at the U.S. Open. But it would be patronizing to these formidable women to pretend they don't seem wedged into a vehicle too flimsy for their muscle."

ROBERT FELDBERG of the RECORD: "You can't help but appreciate the professionalism of Lansbury and Seldes in 'Deuce.' Feelings about the playwright are another matter."

ERIC GRODE of the NEW YORK SUN: "Moldy new comedy about a storied women's doubles tennis team, has stumbled onto Broadway with the grace of a John McEnroe temper tantrum. This dispiriting waste of talent and time exists solely to let two grandes dames of the theater ...engage in the sort of banter and bathos that went out of style with 'The Gin Game.' "

JOHN SIMON of BLOOMBERG: "Sorely missing is a plot. Two women attending a tennis match might work as a snappy revue sketch; stretched out into an evening's entertainment it is both too much and not enough. "

MICHAEL KUCHWARA of ASSOCIATED PRESS: "Terrence McNally's 'Deuce' is a wisp of a play, more a conversation between two old friends than a full evening of theater. But if you are going to listen to two people talk, it helps to have the chatter delivered by the heavenly Angela Lansbury and the equally celestial Marian Seldes."

DAVID ROONEY of VARIETY: "Lansbury and Seldes turn the featherweight 'Deuce' into a game, set and match victory. "