Résumé: A boy
At a bus stop.
Easily missed. 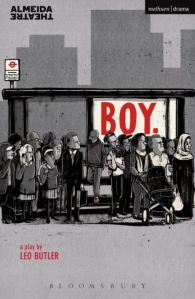 "This is not a play that will send you home feeling good about yourself. On the contrary, its power to disturb is all the more troubling because it offers neither accusation nor redemption. You find yourself wondering about the morality of turning hopelessness into a beautifully crafted theatrical experience. But what would be a more virtuous alternative?" Jane Schilling for The Telegraph

"It’s not a great piece of drama per se but director Sacha Wares and set designer Miriam Buether make it quietly magnificent." Fiona Mountford for The Evening Standard

"Director Sacha Wares, designer Miriam Buether and movement director Liam Baugh have conjured magic and provided plenty to look at. The Almeida’s new production is the kind of thing to turn first-timers on to theatre for ever (especially at 75 minutes without interval)." Fiona Hughes for The Radio Times