Résumé: A sensation upon its initial publication, Ibsen's A Doll House attacked the social and cultural norms of its day by telling the story of Nora Helmer, a woman trapped inside a suffocating, loveless marriage to bank Manager Torvald. All her life Nora has existed as nothing more than a piece of property for a man, first her father and now her husband. She realises that to truly become her own person she must strike out on her own, and so leaves her husband and children in the play's final moments, slamming the door behind her.

A Doll's House, Part 2 resumes the action years later with a knock on the Helmer's front door. Standing on the threshold is none other than Nora. Why is she back? And how will the family she left behind react to her sudden reappearance? 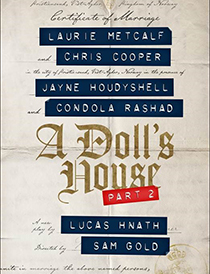 Type de série: Original
Théâtre: John Golden Theatre (Broadway - Etats-Unis) Durée : 2 mois 3 semaines Nombre : Première Preview : samedi 01 avril 2017Première : jeudi 27 avril 2017Dernière : dimanche 23 juillet 2017Mise en scène : Sam Gold • Chorégraphie : Avec : Laurie Metcalf, Chris Cooper, Jayne Houdyshell, Condola RashadCommentaires : One of the most important works in theatre history gets a sequel in 2017, when A Doll's House, Part 2 debuts on Broadway. Written by Lucas Hnath (The Christians), this new play imagines Nora Helmer returning to her family, years after she walked out on them in the climatic moments of Ibsen's 1879 masterpiece. Held up as both a milestone for playwriting and women's rights, A Doll's House is certainly a hard act to follow, yet the fact that producer Scott Rudin is premiering Part 2 on Broadway suggests that Hnath work is something special.Presse : "A door that was once slammed so hard that the noise could be heard around the world is now being knocked upon, most insistently. In the opening moments of Lucas Hnath’s smart, funny and utterly engrossing new play, which opened Thursday night at the Golden Theater, audience members laugh at the sound of the demanding tattoo being beaten upon that door. That’s because they have probably guessed who’s on the other side.”" Ben Brantley for New York Times

"If Ibsen’s play is about suffocation, Hnath’s is about airing things out. Modern in its language, mordant in its humor and suspenseful in its plotting—Nora, now a scandalous writer, needs Torvald’s help to avoid being blackmailed by a judge—the play judiciously balances conflicting ideas about freedom, love and responsibility. And Sam Gold’s exemplary direction keeps you hanging on each turn of argument and twist of knife. Everything about the production works. It’s a slam dunk." Adam Feldman for Time Out New York

"Sam Gold directs in his signature spare style. Set in what is essentially a bare space, there is little action in this tale but much insight, and Gold shrewdly allows the words to take center stage, amplified by some spectacular acting." Roma Torre for NY1

"One of the most famous exits in modern drama prompts an entrance that bristles with tension, provocation and unexpected subversive humor in Lucas Hnath's terrific new play, A Doll's House, Part 2." David Rooney for Hollywood Reporter

"So, did Godot ever show up? Were George and Martha able to save their marriage? And whatever happened to Nora after she slammed the door? In “A Doll’s House, Part 2,” Lucas Hnath pulls off the dramatic parlor trick of bringing back Ibsen’s iconic heroine — in the incomparable person of Laurie Metcalf — to answer that question 15 years later. Despite the modern idiom that Hnath slings around with gleeful humor, it’s amazing how women’s lives haven’t changed." Marilyn Stasio for Variety