Résumé: A young governess is despatched to the country to take charge of two small children by their distant uncle. Her charges appear to be the very picture of "deep sweet serenity" but there are sinister forces at work and her idyll is soon to be destroyed by terror. 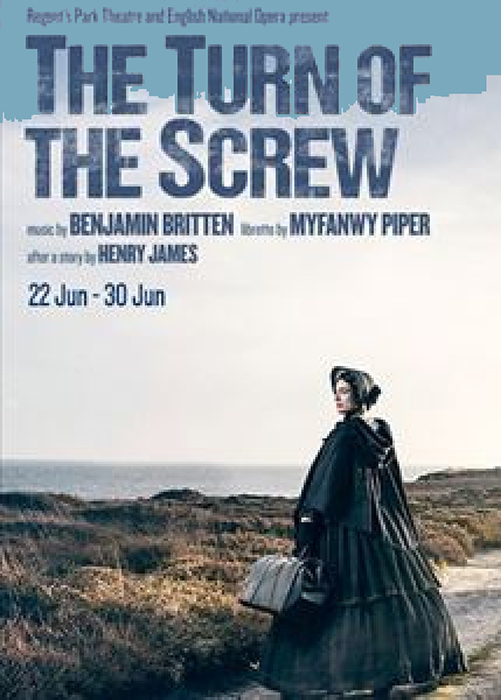 Evening Standard "AN OFFERING FROM OUT OF THE SHADOWS There is a feeling of something unworldly...a psychological drama, in which the corruption of innocence is all too real."

The Guardian "This joint venture between the Open Air theatre and English National Opera works superbly well and you even feel a chill to the spine as you watch a battle for possession of children’s souls in the gathering dusk.”

TrendFM "The opera captures the spooky and supernatural undertones through Britten’s piercingly sensitive and evocative music. This is ASTONISHINGLY PERFORMED by the 13 musicians of the ENO as well as ENO’s Mackerras Fellow, Toby Purser as the orchestra’s conductor.”

Bachtrack "Director Timothy Sheader’s grip on Britten’s opera is extremely strong, bringing a sensitivity that embraced the ghoulish supernatural element of the piece, the deep, flawed humanity of the Governess and the sinister sexual insinuations of Quint’s relationship with Miles. The chances of finding a better production of this any time soon are very slim indeed."

The Upcoming "The composer’s spirit must have been commanding the cast and orchestra at Regent’s Park Theatre on Tuesday evening as their performance encompassed the fear, uncertainty and discomfort originally intended by Myfanwy Piper’s chilling libretto. The cast – along with the outstanding work of conductor Toby Purser and the English National Opera – instil a level of dread and trepidation"

The Stage "Conducting, Toby Purser ratchets up the tension over the two hours and the denser textures of the closing scenes fill the air with a palpable dramatic charge"