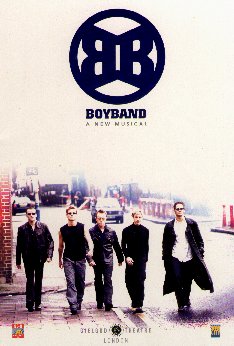 Type de série: Original
Théâtre: Gielgud Theatre (Londres - Angleterre) Durée : 2 mois 1 semaine Nombre : Première Preview : jeudi 27 mai 1999Première : mardi 08 juin 1999Dernière : samedi 14 août 1999Mise en scène : Peter Rowe • Chorégraphie : Emma Victoria • Avec : Kevin Andrew (Adam), Tom Ashton (Matt), Daniel Crossley (Danny), Damien Flood (Sean), Stepps (Jay), Bryan Murray (Wayland), William Oxborrow, Caroline Head, Richard Taylor-Woods, Hay ley TarmaddonCommentaires : This was a cross between a rock concert and a documentary account of the rise and tribulations of a fictitious boy band. Five boys, Adam, Matt, Danny, Sean and Jay are moulded into a pop-group called Freedom under the control of Wayland, their exploitative promoter. Their contract forbids smoking, drinking and sex, since nothing must threaten their squeaky-clean image. Along the way they have to deal with one band member’s drug problem, and another’s emerging homosexuality, and a developing hatred between two of the boys. All in all this story bore many similarities to real-life stories from existing groups like Take That and others. However, ultimately it was the final concert that had the audience screaming for more, since these boys really could produce the goods. As one of the critics asked, “When did you last see a boy band that can really sing?”. It ran for just ten weeks.Presse : THE DAILY MAIL says, "The songs are high quality anodyne pop, as good as anything you hear in the charts."

THE INDEPENDENT says, "The plot is anorexic, and the stars are two-dimensional: so I predict, with the deepest depression, that this musical will go far. "

THE DAILY EXPRESS says, "For all its earnest youth full athleticism, I'm afraid it's a gig with a limp."

THE DAILY TELEGRAPH says, "Almost all musicals depend on the quality of the book and Peter Quilter's script is a disgrace."