Charles Dickens, a tireless walker and astute observer of London life, would almost certainly have been unable to resist the magnetic attraction of a relatively new Thames crossing. Waterloo Bridge, originally Strand Bridge, designed by Sir John Rennie and opened in 1817 by the Prince Regent, would have provided the author with the perfect platform from which to absorb the myriad downstream sights and sounds he would weave into the wonderful opening paragraphs of Bleak House (1852) and Our Mutual Friend (1864).
As he leaned on the parapet, the superb 600-foot-long river façade of Sir William Chambers’s Somerset House (1786) would have dominated the north rlverbank, just as it does today; but there would have remained space for the grand west wing, fronting on to the bridge approach, which was to be designed by Sir James Pennethome and begun in 1851. Dickens was a lifelong lover of the theatre, and at this time might well have been mulling over the embryonic suggestions of publisher Effingham Wilson, made around 1848, for the establishment of a national theatre. It was a project Dickens would support, but in the event nothing would be achieved before his death in 1870. On the south bank Dickens would see, In a smoky murk, the dim outlines of mills, breweries, sawmills and lead works, each with Its individual wharf or dock, fronting rows of small artisans’ dwellings. He could not know that here, almost exactly 100 years later, on 13 July 1951, the year of the Festival of Britain, Her Majesty the Queen would lay the foundation stone for the National Theatre, dedicated to the living memory of William Shakespeare, on a site adjacent to the Royal Festival Hall provided by the London County Council.
The laying of the foundation stone was, for the many Individuals and organizations involved with the creation of a National Theatre - in particular Sir Laurence Olivier and Oliver Lyttleton - the culmination of years of what must at times have been depressing negotiations and discussions on many levels. As time moved on further problems arose: by the early 1960s the promised government monies had failed to materialize, and by necessity the Old Vic became the National Theatre’s temporary home.
Nevertheless, plans for the new building continued. Although at the millennium Denys Lasdun often stands condemned by conservationists as a founding father of comprehensive redevelopment, his selection as architect to the scheme at the critical juncture In 1963 was Inspirational, for, probably alone among British architects of that time, he had the ability to produce a scheme of worldwide significance.
The original proposal included an opera house (an element not dropped until 1967), intended to replace Sadler’s Wells. In drawing up his sketch designs for the two buildings, Lasdun must have been acutely aware of their juxtaposition to Somerset House and to the arching visual link of Sir Giles Gilbert Scott’s second Waterloo Bridge, completed In 1942, producing a contrasting composition of sculptural multilayered brutallsm which he would retain in his final scheme. On its completion in 1976, It was very easy for prominent figures to condemn the concrete geometry of the building, its massing and sense of place; but a quarter of a century on it stands as a living tribute to Lasdun’s genius.
Slightly hemmed In by the sheer, stone-faced east wall to the southern Waterloo Bridge approach, which masks the Queen Elizabeth Hall on its western side, external walkways are linked on an almost square plan to exhibition spaces and restaurants, in turn accessed from paired full-height foyers serving the Olivier and Lyttleton auditoria. The whole Is crowned by two large, unadorned, flat-roofed fly towers which seem to emphasize the cascading horizontality of the composition as it sits above the river. In addition to the two major spaces, the Cottesloe, a studio theatre, almost abandoned In the early design stages In order to save money, provides a remarkably flexible three- dimensional courtyard arena. Inside, it is a black box with multiple lighting banks, black walls, brown carpets and utility seating for an audience of up to 350.
The Olivier, with its pictorial open stage and single balcony, seats 1,100 and is the largest of the three theatres, shuttered concrete emphasizing its grand, dark ambience. With brown carpets and mauve seating, much reliance is again placed on the use of multiple lighting banks.
Although the Lyttleton, having 900 seats, has been designed with a conventional proscenium, the use of shuttered sculptured concrete with dark brown seats and floor coverings again leaves the lighting to do much work. The theatre's design has about it more than a hint of film.
Success has not been In short supply at the National. The year 1980 saw Sir Michael Gambon dominate Brecht's Life of Galileo, and in the same year Mary Whltehouse and Sir Horace Cutler threatened prosecution for obscenity over The Romans in Britain. In 1982 Guys and Dolls was a smash hit, as was The Wind in the Willows In 1990, 1991, 1993 and 1994. Dame Judi Dench was to win the Olivier award for best actress In 1995 for Absolute Hell and A Little Night Music. In 1997 the National’s productions won six of seven possible Evening Standard Awards.
In 1976 the Architectural Review acclaimed the National Theatre as ‘London’s most exciting new building’, and that accolade has stood the test of time. The building is a lasting memorial to its architect, Sir Denys Lasdun, who died on 11 January 2001.


1848. Suggestions for a national theatre made by publisher Effingham Wilson / 1913. Site acquired to the rear of the British Museum, but in 1925 further sites are under consideration / 1937. Site opposite Victoria and Albert Museum purchased, and Sir Edwin Lutyens and Cecil Masey commissioned to design the theatre / 1946. Death of Lutyens and appointment of Australian architect Brian O’Rourke / 1951. Foundation stone on South Bank site laid by the queen / 1963. Denys Lasdun selected to design a theatre and opera house / 1976. The National Theatre opens on 25 October / Statutorily Listed Historic Building: Grade II*

The National Theatre as a major public building, and as a powerful dramatic entity 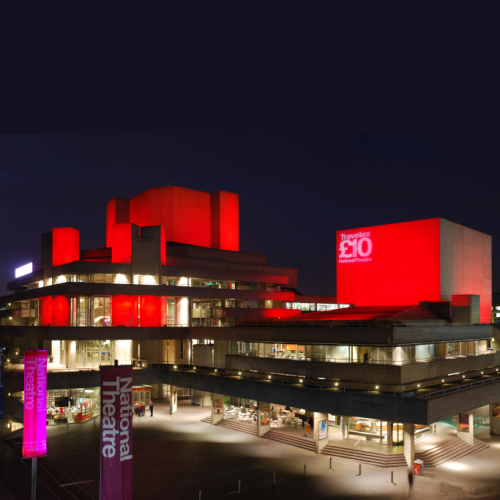 
Remarquable:
The National Theatre as a major public building, and as a powerful dramatic entity