In 2000, as if inspired by an original thought, the government trumpeted the advantages of travelling to the Millennium Dome at Greenwich by river; but at least since the Romans occupied Britain, river traffic has made a major economic contribution to London’s prosperity. While in the 16th century London Bridge would afford City residents access to the South Bank, persons of rank and position would arrive at the Globe Theatre by river from Westminster. Only in the decades since the Second World War has the river slowly died, and its industrial waterfront all but disappeared. Where wharves and warehouses stood, a strange leftover world has evolved as governments and local councils have exchanged a unique piece of London’s character for a combination of demolition sites, artiness and very lucrative flat and office developments.
Within the Liberty of Holywell (now the London Borough of Hackney), The Theatre, widely supposed to be the first London theatre, was built in 1577, but was short-lived; bedevilled by a disputed lease and structural problems, the building was demolished at the latter end of 1598. Since the medieval period usable structural timbers were rarely discarded: those from The Theatre were transported south of the river to the Liberty of the Clink (now in the London Borough of Southwark) to provide a basic frame for the Globe, which opened in 1599, only to be burnt down and rebuilt in 1613-14. The second Globe was pulled down as a result of Puritan pressure around 1644, and tenement housing was built on the land.
The pinpointing of the theatre site after almost 350 years by Professor John Orrell, and its subsequent excavation by archaeologists from the Museum of London, revealed a fragment of the building beneath Anchor Terrace (1834), a unified yellow stock brick and stucco block of eight houses (now little more than a gutted shell, with entirely modern interiors used as offices) on the east side of the approach to Southwark Bridge. As only a small part of the building could be exposed, little positive information regarding Its exact size and even its shape could be established, but an estimated diameter a little in excess of 100 feet places the west wall under the roadway.
For generations the possibility of reconstructing the Globe stimulated much informed discussion, but little more than that - until American actor Sam Wanamaker’s first visit to London In 1949. He noted with some surprise and not a little sadness the lack of any theatrical memorial to probably the world's greatest playwright, and some 20 years later, In 1970, he founded the Globe Playhouse Trust, establishing himself as the only Individual willing to risk failure in order to achieve his long-term aim.
To build his theatre on the original site was impossible, but some 250 yards to the west, In the lee of Bankside Power Station, now the Tate Modern Gallery, a former council depot on the river front was made available by Southwark Council in 1970, and Wanamaker could at last see a practical way forward.
The site, originally occupied by the Anchor Tavern, lies on the western angle of Bankside with New Globe Walk, adjacent to Cardinal's Wharf, a 17th- century house of particular interest, and divided from a pair of brown brick houses (dated 1712) by the extremely narrow Cardinal’s Cap Alley. A plaque on the earlier house records that Sir Christopher Wren lived here during the building of St Paul’s Cathedral; this may be no more than legend, although it would have been the ideal place from which to observe the progress of the cathedral work. On the opposite angle of New Globe Walk is a late 20th-century nine- storey block of flats of little interest.
To turn his vision into reality Wanamaker commissioned architect Theo Crosby and sought the collective advice of leading theatre historians. The scheme, if realized, would not only provide for a learned reconstruction of a Shakespearean theatre, it would also present superb educational facilities, a permanent exhibition, a second, smaller theatre based on an early 17th-century example designed by Inigo Jones (architect of the Banqueting Hall in Whitehall) and the extensive support facilities required of a modern complex.
To attempt a three-dimensional reconstruction, based on partial archaeological evidence, panoramas, building contracts and contemporary buildings, is inevitably to court criticism and dispute. Peter McCurdy, whose firm McCurdy and Co. of Stamford Dingley, Berkshire, fabricated the timber work, quite correctly identifies the theatre complex as an educational tool; his quest for accuracy of construction led him through an exercise in meticulous research and analysis involving the detailed study of over 100 buildings of the period, finally producing the details that would be translated into working drawings. Major timbers were obtained from all over Great Britain, including some as a gift from the Forestry Commission, taken from the ancient Forest of Dean in Gloucestershire. In fact, McCurdy will tell you that four posts standing together are respectively from England, Scotland, Wales and Northern Ireland. Site work commenced in 1987, and the task of erecting the timber frames began in 1993.
On 12 June 1997 Her Majesty the Queen and His Royal Highness Prince Philip opened the complex, but neither Sam Wanamaker nor Theo Crosby was present to celebrate this massive achievement - for Sam Wanamaker had died on 18 December 1993, and Theo Crosby on 12 September, 1994.
Where many a barge doth saile, and row with are, Where many a barge doth rest with toppe-royall. O’ towne oftownes, patrone and not-compare: London, though art the floure of cities all.
From ‘To the City of London' by William Dunbar, c.1530

The Globe complex Is a tribute to one man’s inspired vision as well as an intellectual and constructional exercise. It is also a triumph of planning and design on a constricted site. 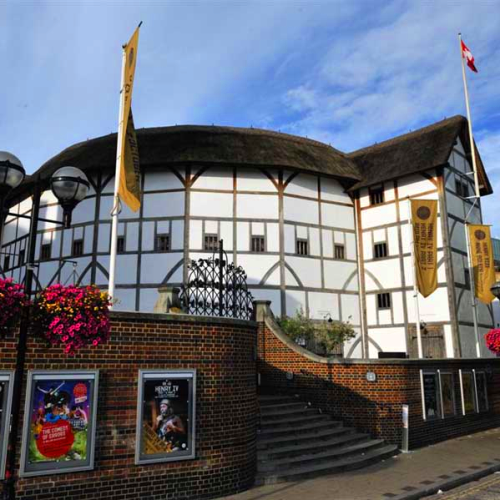 
Remarquable:
The Globe complex Is a tribute to one man’s inspired vision as well as an intellectual and constructional exercise. It is also a triumph of planning and design on a constricted site.