Hammersmith Apollo is one of London’s major live entertainment venues. It is located in Hammersmith, West London and is one of the UK’s largest and best-preserved original theatres.

It opened on the 28th of March, 1932 as the Gaumont Palace cinema, designed in the Art Deco style by renowned theatre architect Robert Cromie, who also designed the Prince of Wales Theatre in Central London.

It was designed on behalf of a joint collaboration between exhibitor Israel Davis and the Gaumont British Theatres chain. It had 3,487 seats and the opening programme was Tom Walls “A Night Like This” and Helen Twelvetrees in "Bad Company".

It had a large 35 foot deep stage, an excellent fan shaped auditorium (which, despite its enormous 192 feet width allows remarkable intimacy and excellent sightlines from all parts of the house), twenty dressing rooms, a Compton4Manual/15 Ranks theatre organ and a café/restaurant located on the balcony/foyer area.

Hammersmith Apollo was renamed the Hammersmith Odeon in 1962 and started playing host to many legendary acts of the day, including The Beatles, The Rolling Stones and Bob Marley. It screened its last regular film on 8th August 1984, “Blue Thunder” starring Roy Scheider.

Following a sponsorship deal, it was later refurbished and renamed the Labatt’s Apollo. During his 1992 sell out tour, Michael Ball, the musical theatre star, best known for his roles in Les Miserables, Phantom of the Opera and Hairspray, was the last person to play the venue when it was named "Odeon" and the first person to play after it was renamed "Apollo". The venue continued to host long running shows and musicals such as Riverdance and Dr Doolittle.

In the early 1990’s it reverted back to the Hammersmith Apollo. In 1990, it was designated a Grade II listed building by English Heritage and was upgraded to Grade II* status in 2005.
2003 saw the venue renamed as the Carling Apollo Hammersmith, after another brewery entered into a sponsorship deal with the then-owners, Clear Channel Entertainment, a US-based company (which then spun off as Live Nation UK). Major alterations enabled the stalls to be removable, allowing for both standing and fully-seated events. Capacity became 5,039 (standing) and 3,632 (sitting) and in recent years, performers have included Oasis, REM, Stereophonics , Kylie, Elton John, Peter Kay and Paul Weller to name but a few.

In 2006, the venue reverted to its former name, the Hammersmith Apollo. The owners were encouraged by Hammersmith & Fulham Council and the Cinema Theatre Association to reinstate the original Compton organ console which had been removed from the building and put into storage in the 1990’s. The organ chambers were retained in the building and with its’ console connected up again, the huge Apollo auditorium is now filled with its’ sound after 25 years of silence.

The venue changed hands once again in June 2007 when it was bought by MAMA Group, a UK based entertainment company who own a number of music venues and festivals, artist management companies and other music-related businesses such as the UK’s most widely circulated music magazine, The Fly.

On 14 January 2009, it was announced that MAMA Group had entered into a joint venture with HMV to jointly run 11 live music venues across the UK, including the Hammersmith Apollo, the Kentish Town Forum, the Jazz cafe and Aberdeen's Moshulu. Hence, the venue is now known as the HMV Hammersmith Apollo.

Now the legendary music venue has changed hands as AEG Live and Eventim have teamed up and reverted the building back to the original venue name, Hammersmith Apollo.

The enormous width (192 feet) of the site allowed Cromie to provide an excellent fan shaped auditorium which for its size is remarkably intimate. The rear of the circle is 170 feet wide and the circle only overhangs the stalls by 10-12 rows providing excellent sightlines from all parts of the house.

The Art Deco style decoration in such a large auditorium is slightly underpowered but nevertheless this is an outstanding, nearly unaltered, example of cinema architecture and is Robert Cromie’s finest surviving cinema. 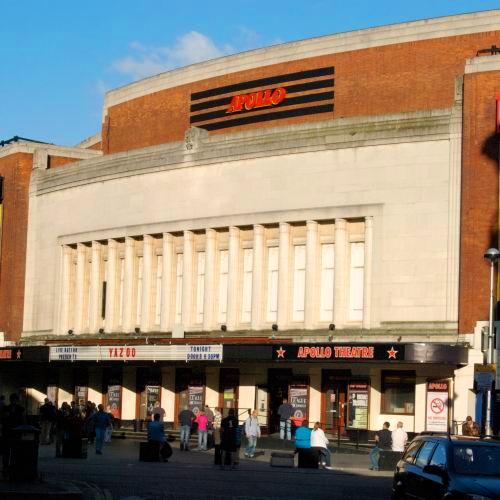 
Remarquable:
The enormous width (192 feet) of the site allowed Cromie to provide an excellent fan shaped auditorium which for its size is remarkably intimate. The rear of the circle is 170 feet wide and the circle only overhangs the stalls by 10-12 rows providing excellent sightlines from all parts of the house. The Art Deco style decoration in such a large auditorium is slightly underpowered but nevertheless this is an outstanding, nearly unaltered, example of cinema architecture and is Robert Cromie’s finest surviving cinema. 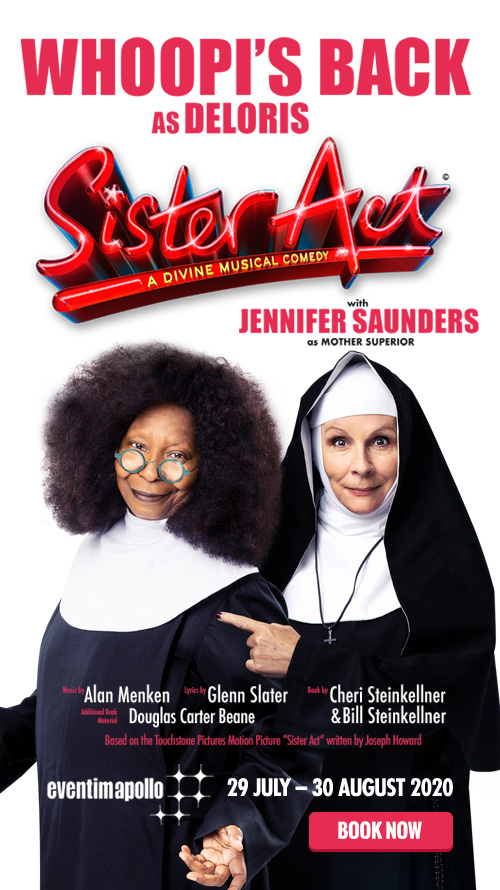 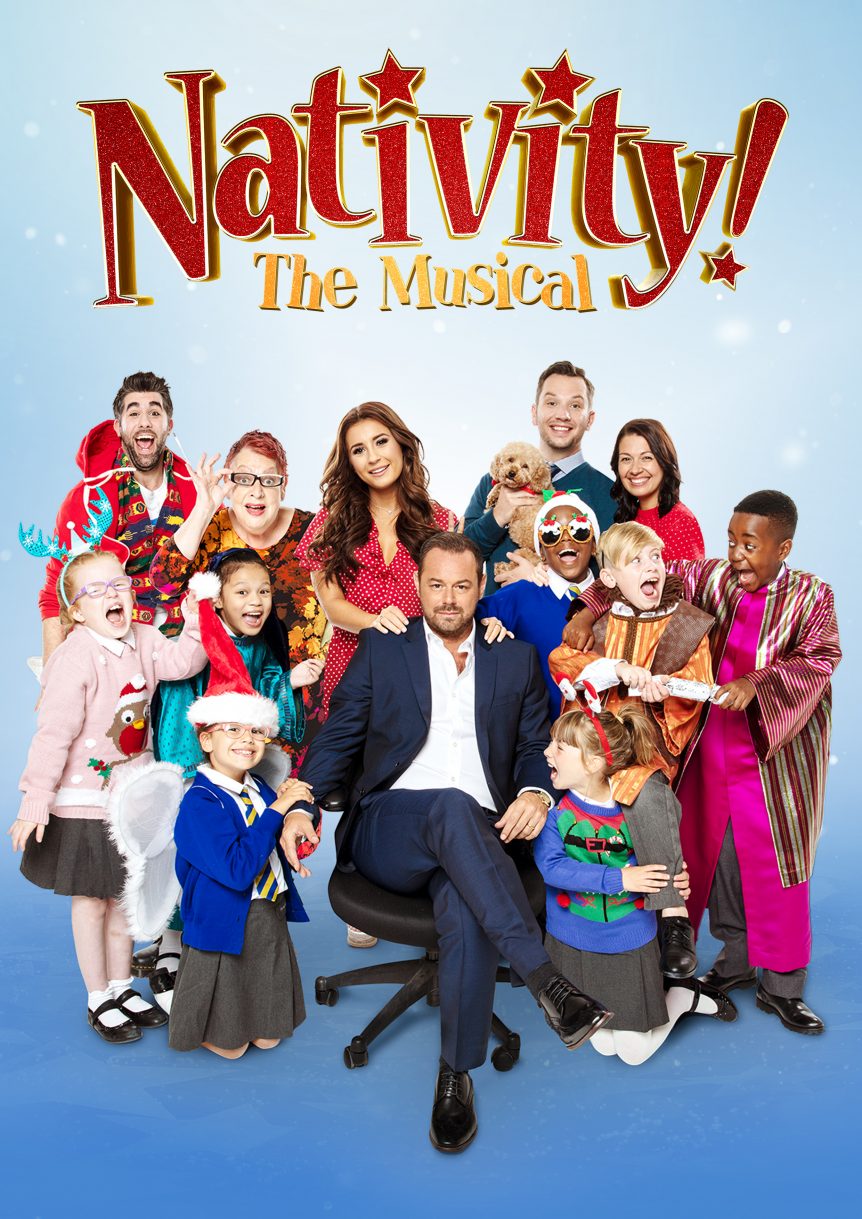 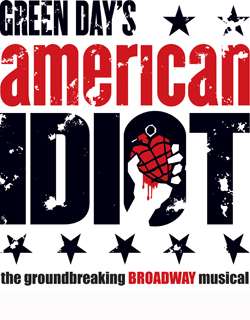 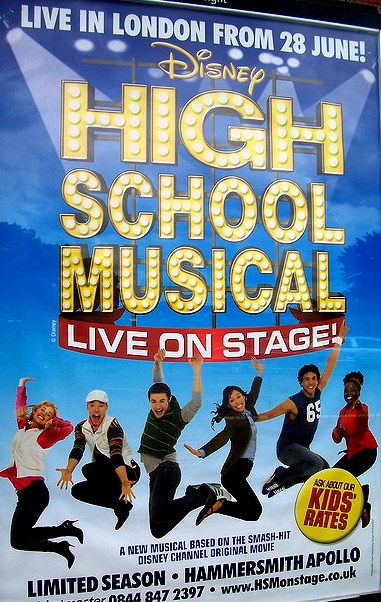 Commentaire: This show originated in Manchester, and even though it had a somewhat complicated plot, it was effectively yet another compilation musical. It had two TV soap-operas stars and an American rock star in its cast, and was lavishly staged. However, it only managed a ten week run.  (plus)

Commentaire: With clever animatronic puppets from the Jim Henson studio, and a flying moth over the auditorium, this £4 million production was a satisfactory adaptation of the Rex Harrison/Anthony Newley film version, and provided ideal family entertainment for the best part of a year’s run.  (plus)

Commentaire: This was a gloriously camp re-creation of the film: Paris (berets and an accordion player), Switzerland (clock, bells, sheep and cows), finally Greece (blokes in white skirts, gold waistcoats and red caps); a tendency for the boys to strip continually down to their Y-fronts; an updating with some terrible jokes (one of Don’s gormless male friends gives him a baguette and says, knowingly. “Now you’ve got something else that’s nine inches” - another gets to Paris and says “I really want to go to the Louvre” only to be told “Well, use that tree over there”) - the whole show was gloriously awful. Darren Day managed a very creditable impersonation of Cliff Richard, and Hilary O’Neill stole the show with a totally over-the top comedy performance as the mother. The show was critic-proof, and packed with Cliff Richard/Darren Day fans who screamed their delight from start to finish. It had played a six-month sell-out season at Blackpool Opera House in the summer of 1996, and then toured before this six month season in London.  (plus)

Commentaire: The music was by John Farrar, a former member of Cliff Richard’s legendary backing group, The Shadows, the lyrics by Tim Rice and the production by the renowned Frank Dunlop. Because of Cliff Richard’s personal reputation as the “Peter Pan of Pop” and the squeaky-clean image of his private life, he was never likely to be taken seriously by the critics. They had great fun suggesting other unlikely pieces of casting: Liberace as King Lear, Max Bygraves as Titus Andronicus, Julie Andrews as Lady Macbeth - and calling the show more “withering than wuthering”. However, for its Birmingham Arena premiere it had a record-breaking £8.5 million advance, with 340,000 tickets sold. It was a sell-out there, in Edinburgh, Manchester and during its London Apollo run, and packed every night with the blue-rinsed army of fans nicknamed the “Cliffhangers”.
Whatever the critics’ view of Cliff Richard as an actor, there was no doubting he was a genuine, twenty-four carat star.  (plus)

Commentaire: This was a revival of the production which ran at the London Palladium from June 1991 to January 1994, back in the West End for the second time for a nine week season.  (plus)