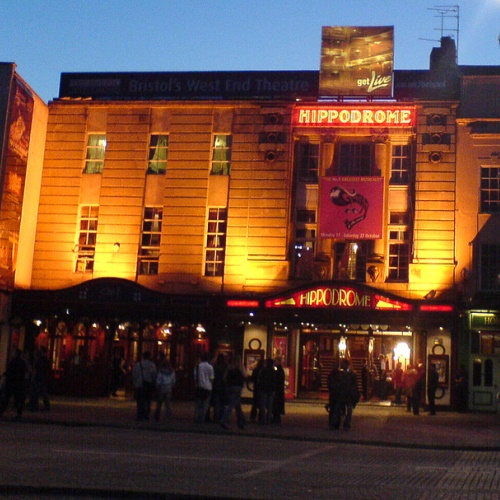 The Bristol Hippodrome, the city’s very own West End theatre, opened its doors on 16 December 1912 when the curtain rose for the first time on what was generally agreed to be Oswald Stoll’s most magnificent provincial theatre.
It is a superb example of the grand architecture of the late Victorian era and is one of the masterpieces of design by Frank Matcham, the most eminent theatre architect of his time.
One of Matcham’s spectacular features included the provision of a huge water tank constructed in front of the stage, which could be filled within one minute by 100,000 gallons of water, allowing the theatre to combine three forms of entertainment – stage, circus and aquatic. To protect the orchestra and those sitting in the front Stalls from the heavy spray which resulted from some of those effects, an enormous glass screen could be raised by the single movement of a lever.
A unique feature within the theatre, which unlike the water tank still survives today, is the dome in the roof above the stalls, which can be opened to reveal the sky above. Now that the auditorium is air-cooled the dome is rarely used, but many audiences have marvelled at this event during intervals and still request its opening, which to our knowledge is the only operating dome still functioning this way in the UK.
Towards the beginning of the century, the theatre staged a variety of acts as a Music Hall. Since then, and due to the fact that it has one of the largest theatre stages in Britain, The Bristol Hippodrome has established itself on the touring circuit for all major musical productions, thus becoming known as Bristol’s West End Theatre.
Fire! Fire!
Having survived the war unscathed during which time the theatre contributed enormously to the morale of Bristolians with a continuous run of first-rate entertainment, it was a tragic irony when, less than three years after the war ended, a disastrous fire broke out and almost destroyed it in 1948.
The annual pantomime was Babes in the Wood and at approximately 1pm on 16 February, fire broke out backstage and within minutes had spread from the flies and enveloped the stage. Thirty-foot high flames gutted the entire rear portion of the theatre, but the auditorium and roof were saved after a frantic battle by the Fire Brigade. The conflagration was halted, almost miraculously it seemed, at the orchestra pit and the damage sustained in the auditorium was caused chiefly by smoke and water.
No definite cause of the fire was established and the investigation committee concluded that the most likely cause was a cigarette or match carelessly discarded by some unknown person immediately before leaving the theatre. After a major rebuild/refurbishment period, the theatre reopened on 24 December with Cinderella and Ted Ray, to rapturous applause.
Sensational Shows
The theatre has diversified over the years to encapsulate the full spectrum of live theatrical entertainment. From top West End shows Cats, Les Miserables, Phantom of the Opera, We Will Rock You, Dirty Dancing and Legally Blonde, to name more than a few, through to regular visits from the best in Opera and Ballet, Comedy, Childrens’ Shows, Concerts and even the Circus!